Whatever Happened to the $15 Minimum Wage? 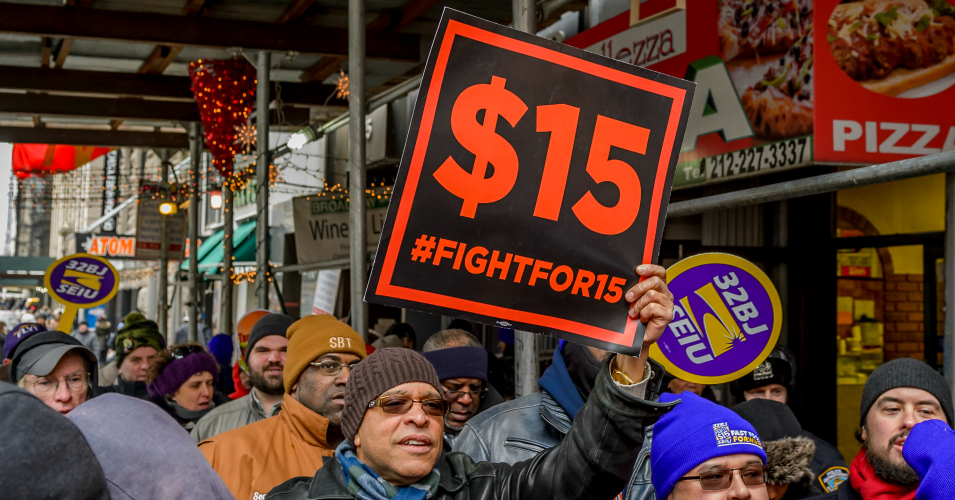 Workers demonstrate for the $15 minimum wage in New York City in 2017. LIGHTROCKET VIA GETTY IMAGES

It seems like only yesterday that the $15 minimum wage was high on the agenda of every self-respecting progressive politician, including Hillary Clinton in her presidential campaign. The “Fight for 15” was successful in several states and even went statewide in New York and California.

So why aren’t we hearing more about the idea these days? It may be because labor markets are working, just like textbook economics say they should.

What about fast-food workers? They’re making out like bandits in some places. The average pay nationwide is $17.20, reaching as high as $28.61 in hot markets, according to ZipRecruiter. They average more than $20 an hour in New York City and San Mateo, and more than $19 in Boston, Berkeley, Santa Monica and Juneau. And those are entry level wages!

For real eye-popping numbers, nothing quite tops the market for nurses. Before the pandemic, nurses earned an average of $73,300, or $1,400 per week. In the early stages of Covid, their pay rose by 25 percent. Then, a bidding war started as hospitals tried to fill shortages by luring prospects from other cities. The number of nurses who engage in temporary travel to take advantage of lucrative pay deals in another city rose from 5,226 in January, 2019 to 36,364 in January, 2022. According to a Health Affairs study, traveling nurses are now being paid between $5,000 and $10,000 a week!

Why is all this happening? Supply and demand. Flush with cash from pandemic-induced government benefits and facing new buying opportunities, as previously closed venues are opening up, consumers are ready to spend. Establishments need additional employees to meet the demand. Yet, settled into the comfort of working from home and perhaps not working at all, fewer people are anxious to return to their previous labor market jobs.

In the health care sector, there is an additional factor. Hospital nursing has always been a “burnout” profession. But the pandemic has brought with it wartime-like conditions for critical care nurses for the better part of two years. Many have already quit, and they don’t plan to return.

So why would anyone want government to step in and interfere with the labor market?

The general public has always supported a minimum wage, though the reasons are somewhat muddled. No doubt many view the labor market the same the way Charles Dickens did. Kind employers pay high wages. Mean employers pay skimpy wages, with a “bah” and “humbug” to boot. On this view, wages are stagnant when there is a pervasive sense of miserliness on the part of employers. If wages are rising, there must have been sudden surge of generosity.

Needless to say, no economist accepts this view.

Nonetheless in recent years some economists have advanced a theory that comes awfully close. Wages are not determined by supply and demand, the way price is determined in the market for wheat, says liberal economist Paul Krugman. Instead, they are largely determined by the attitudes of employers. Yet the problem isn’t that employers are greedy. Krugman says they are shortsighted. They fail to realize that there are important benefits to paying workers more: “better morale, lower turnover, increased productivity.” These benefits largely offset the direct effect of higher labor costs. As a result, a minimum wage law imposed by government can make everybody better off. Think of it as a labor market free lunch.

For this theory to make any sense, three things must be true. First, it can’t just be one employer who is shortsighted. For the market wage to be suboptimal, employers collectively must be getting wages wrong. Second, when wages are rising (as they are right now) employers must have experienced a sudden surge of farsightedness. Third, for a minimum wage to be helpful, legislators must be smarter than employers at knowing what the right wage is. None of these assumptions seems likely.

A job inevitably comes with a whole package of attributes, in addition to a wage. To be considered are fringe benefits, worker training, opportunities for advancement, injury rates, and employee turnover – just to name a few. Then, there is the work itself. Is it grueling and arduous? Monotonous and repetitive? Unrewarding and unsatisfying? And what is the pace of work?

When Amazon adopted a company-wide minimum wage it was probably reacting to political pressure and trying to avoid wages being set by legislation. At the same time, it began adopting measures to increase productivity. Robots are bringing materials to humans at work stations in order to facilitate uninterrupted human output. Surveillance can tell management how fast or slow each worker is working and even how much time is spent on informal bathroom breaks.

Take the case of an Amazon worker currently benefitting from Amazon’s higher wage scale. Over a three-year period, this worker was required to increase the number of items picked from a robot deliverer from 290 an hour, or almost 5 per minute, to 360 items, or 6 per minute. Over the same period, he apparently developed tendonitis in his forearms.

As this example illustrates, there is a big tradeoff between wages and other aspects of work.

When wages are set in the marketplace, employers must compete for labor by offering an entire bundle of job attributes – not just the wage. When wages are set by government fiat or by threats from powerful politicians, employers are thereby prohibited from offering the bundle that best meets the worker’s needs.