Why Winning is Losing for Putin 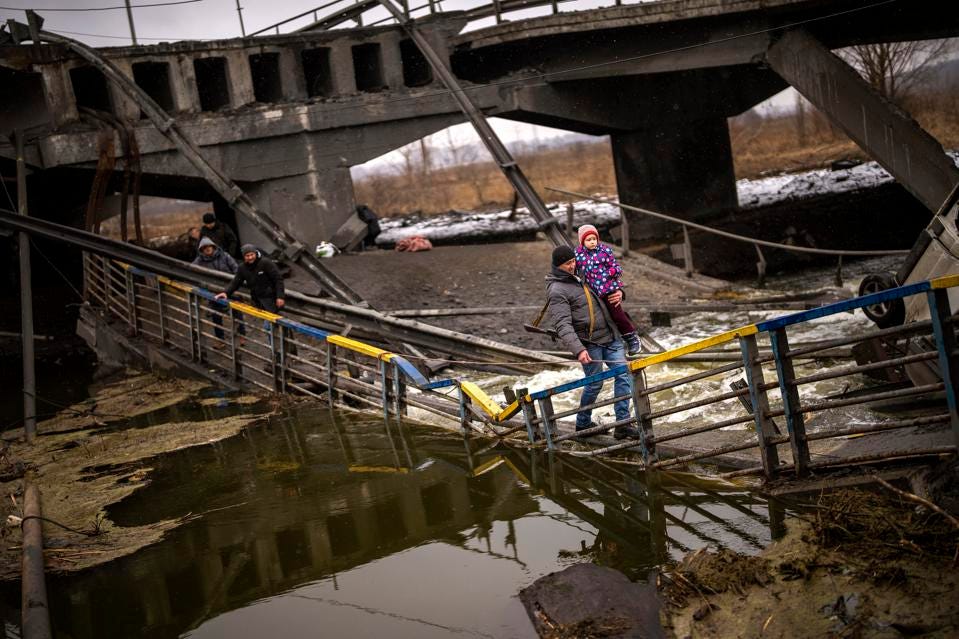 Local militiaman Valery, 37, carries a child as he helps a fleeing family across a bridge destroyed … [+]ASSOCIATED PRESS

If Putin stays his course, Russia will, at one extreme, become Iran economically speaking. Or it may find that its only major trading partner is China, turning Mother Russia into China’s baby. Putin still has a way out. He can cease fire and negotiate for something both side can agree.

Vladimir Putin has landed himself in a severe economic, if not military trap. Unlike Putin’s prior military excursions and incursions, invading Ukraine has made him, his associates, and, indeed, his nation radioactive. Aeroflot can no longer land in any Western city. Western airlines are canceling flights to Russia. BP and Shell Oil are pulling out of Russia. AerCap, the world’s largest aircraft leasing firm is doing likewise. So are huge banks, including HSBC HBA 0.0%, Société Géneral, and Shinhan Bank. Even Disney has had enough. It’s pulling Batman from Russian theaters. The antipathy is growing and will become extreme if President Putin does what he’s now starting to do to “win” — pulverize Ukraine’s beautiful cities and kill tens of thousands of Ukrainians.

Yes, countries under his military dominion, like Belarus, and countries like Kazakhstan, led by fellow autocrats, will hail Caesar. But they don’t produce movies, let alone high technology, airplane parts, or all the other things that Russia is losing or going to lose. If Putin engages in mass murder, no company in the free world, which extends far beyond NATO, will continue importing even an ounce of Vodka from Russia. Nor will it export a pound of anything to Russia.

Yes, Western Europe will keep buying gas and oil for a while from Russia. But Europeans, particularly the Germans, will reactivate their nuclear energy plants and build new ones. And economic death by a thousand cuts will hit Russia like an avalanche as people and companies in the free world start seeing Putin as a brutal psychopath who takes what he wants with a three-word justification — It’s Russia’s lebensraum.

President Biden, bless his age, has seen this movie before. And he’s met Putin’s military aggression by declaring, together with America’s NATO and other allies, the equivalent of total economic war. As he indicated in the State of the Union address, the economic war has just begun. But he’s started it with a massive barrage. Freezing the Russian Central Bank’s assets, let alone the other economic sanctions, including freezing Putin’s own assets and those of hundreds of his oligarch patrons, is an extraordinary move. In conjunction with the free world’s voluntary embargo of Russia, Biden’s and the rest of the Free World’s economic war is producing and will continue to produce Russian bank runs, the partial or full closure of Russian banks, the loss of Russian tax revenues, resort by the Russian Central Bank to the printing press to pay for government spending, and hyperinflation.

Putin may not have expected this. It goes far beyond America’s oil embargo on Japan, which some believe instigated Pearl Harbor. Hence, Putin’s response — threaten nuclear war — is not entirely surprising. But a nuclear strike, no matter how quickly it could be delivered by a hypersonic missile, would be suicidal for him and his top commanders. The US also has thousands of nuclear weapons. Whether Putin is ready to die is unclear. But surely his top commanders are not. Biden knows this, which is why the president is viewing Putin’s nuclear threats as cheap talk.

If Putin stays his course, Russia will, at one extreme, become Iran economically speaking. Or it may find that its only major trading partner is China, turning Mother Russia into China’s baby. As for his stated goal of providing a military buffer between Russia and NATO, the opposite is underway. The US will move major military assets into Poland, the Baltics, and Romania. More will surely come. If conventional war breaks out, Russia will face a world war, with the entire world helping push him out of Ukraine, which would then quickly be enrolled in NATO. Russia’s conventional army would likely be annihilated and Putin will, in the process, be ushered out the door, either vertically or horizontally.

Putin still has a way out. He can cease fire and negotiate for something both side can agree — a long-term security agreement between NATO, Ukraine, and Russia that demilitarizes Ukraine and stations no material NATO or Russia forces within 1000 miles of each entity’s border. The agreement can also lift all current and past sanctions, require Russia purchase Crimea, restore the Donbas regions to Ukraine, and set up a gradual transition under which both Russia and Ukraine jointly enter NATO with the entrance of Ukraine conditioned on the entrance of Russia.

In short, it’s time for Vladimir Putin to declare victory and leave Ukraine. But do so on terms that achieve his real ends — terms that are reasonable given Russia’s security interests and terms to which NATO and Ukraine can agree.