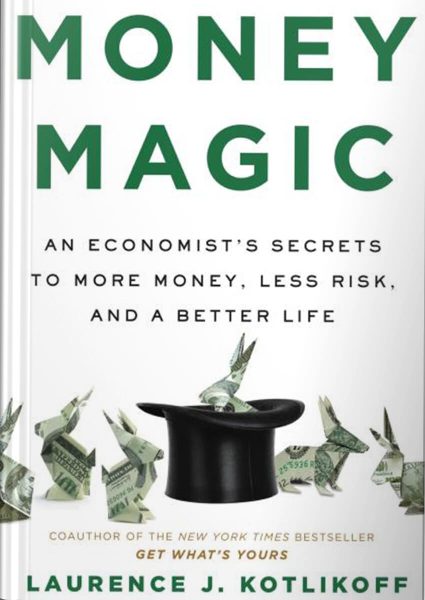 The book has a striking dust jacket that’s easily worth more than a thousand words. It shows a top hat with emerging rabbits made of origami-folded cash.

The book is Laurence J. Kotlikoff’s Money Magic: An Economist’s Secrets to More Money, Less Risk and a Better Life.

Most offers of money magic come from investment managers. Their special hat, they say, will produce a multitude of investment rabbits. But every hat trick requires that you pay a fee. More important, the only lever on your future these magicians offer is a possible higher investment return.

He’s an economist, a professor at Boston University and a prolific researcher. (Full disclosure: I’ve co-authored three books with Kotlikoff, two of them for MIT Press. I can personally testify that he is a close relative of the Energizer bunny.)

Read the original article on the Dallas Morning News website.

He deals with empowering choices we can make rather than investment returns that are beyond our control.

Will his mundane rabbits advance your secret desire to achieve world domination by age 40? Sorry. Not a chance. But all those highly personal decisions, made correctly, can transform your life from one of quiet desperation to one of financial security and fulfillment.

Here are some examples:

College debt may not “pay off.” Everyone knows education debt is a serious problem, but most people still assume that it’s worth it. Measured in lifetime standard of living, it all depends on your chosen career. Indeed, in one of his examples, Kotlikoff demonstrates that college education debt was mutually exclusive from having a job in the career for which a student prepared.

His chapter on college education, by the way, should be required reading for everyone thinking about where to go to college. It gives an insider perspective on where the true value is.

Plumbers trump doctors. While doctors in general practice may enjoy more prestige, the long years of education and training, not to mention debt, make plumbing a better choice if your focus is on lifetime standard of living.

Marriage is one of the best investments we can make. Due to what economists call “shared economies of living,” the journey from single to being a couple can work to increase your lifetime standard of living by about 25%. But if you divorce, he shows how to share the damage equitably.

The greatest benefit of homeownership isn’t appreciation. It’s the invisible and tax-free “imputed income” of residency we enjoy compared with renting. The second-greatest benefit is that it serves as our reserve fund for long-term care. Mortgages, it turns out, have very little relationship to homeownership (except being a necessity for most people).

Social Security is our biggest lifetime asset. Kotlikoff was an early advocate of taking Social Security benefits later, not sooner. Because benefits increase so much for each year of deferral, it’s almost always better to spend down other assets to maximize benefits.

I’ve written about this for decades. Many people take issue with this. They are correct in one respect. Kotlikoff assumes that everyone will live to age 100, an age that increases the value of Social Security relative to everything else. It’s also a certainty that 98% of all people won’t realize the full value of Social Security as he calculates it because they will die much sooner.

But that’s a technical quibble. The importance of Social Security, for everyone, is an amazing reality.

Skeptical? Then consider this. A National Bureau of Economic Research paper that measured the value of Social Security as a virtual asset found that its value was larger than the value of investments, home equity or defined-benefit pensions for all but the top 10% of all households.

Yes, you read that right. Social Security is the most important resource for 90% of all Americans.

Retirement isn’t all about “the number” — the mythical financial wealth figure required to retire. Like the rest of life, retirement is about managing your personal decisions.

← What Are Republicans For? Newt Gingrich: Dana Milbank’s take on my role as House speaker was way off →