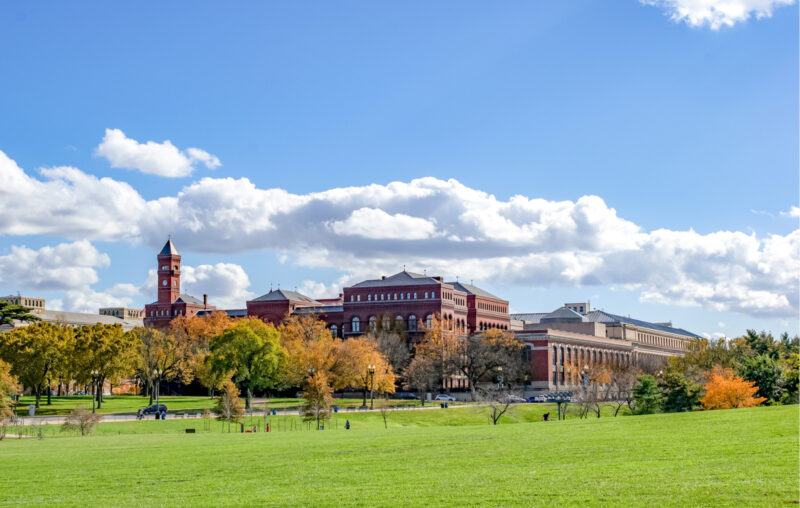 Why do so many US states have two rival flagship universities, one focused on agriculture and technology and the other steeped in liberal arts traditions? In Montana, for example, one is (jocularly) the “cow college,” the other, “the dancing school over the hill.”

The agricultural and technical university, which often has “state” in its name, is typically a land-grant university formed under the auspices of the Morrill Act of 1862. It was meant to be a practical, down-to-earth “people’s university,” and even today it is less prestigious than the state’s traditional university, usually founded much earlier. But the emphasis on technology has made some of the land-grant universities research powerhouses and often bigger than their in-state rivals.

The history of these schools is so complicated and idiosyncratic that it provides a fertile field for understanding how history moves forward (in time, not necessarily making progress). My illustration above of “State U.” vs. “University of” is a simplification; some traditional colleges added agriculture and mechanics to their curricula after the Morrill Act passed and there were other patterns as well. Ultimately, all 50 states got at least one land-grant college.

Simplification is typical of land-grant narratives, including the periodic ceremonies honoring the Morrill Act. “[I]n both histories and public rites, there has been a tendency to romanticize the origins and evolution of land-grant colleges,” wrote two education professors in 2013 in an effort to set the record straight (and introduce a greater emphasis on the scientific origins of the schools). ”The higher education community looks with nostalgia on [Justin] Morrill’s great achievement, when democracy created people’s colleges.”

Indeed, the classic history of land-grant schools by Earle D. Ross was Democracy’s College: The Land-grant Movement in the Formative Stage. The book began, “The land-grant college is a peculiarly American institution. . . . The determining influence has been that of popular determination and direction—a democratic system according to the expanding definitions of that term.”

But was it a triumph of democracy? Or was it a complicated tangle of special interests, attractive rhetoric, and, over time, strong personalities shaping their schools in the face of ambiguous laws?

I am increasingly seeing political history as just that—an unpredictable interplay of self-interested forces. What is predictable is that multiple interests will interact.

First, the facts about the land-grants. In 1862, during the Civil War, a Vermont Senator, Justin Morrill, successfully pushed a law “donating public lands to the several states which may provide colleges for the benefit of agriculture and the mechanical arts.”

The law authorized 30,000 acres of federal public lands for each Representative and Senator, to be used to support a college for agriculture and mechanical arts. States that didn’t have unused federal land (such as the New England states) would be given scrip to buy public land from western states. This led to substantial opposition from westerners, who didn’t want their land subject to speculators.

The law was not the result of massive public demand for education. Just the opposite. “Farmers looked with suspicion on the very concept of agricultural education,” wrote historian John Y. Simon. “The juxtaposition of the two words, ‘agriculture’ and ‘college’ caused many amused chuckles.” (That’s why one attempt at an agricultural college was called “The Farmers’ High School.” It eventually became Penn State.)

Pressure for a “people’s” technical college-level education stemmed from elite agricultural societies and proponents of mechanics’ institutes. Agricultural societies, impressed by the growing science of botany, wanted to bring science into farming and had been trying to start agricultural colleges for decades. On the “mechanics” side, a group backed by Horace Greeley, the influential editor of the New York Tribune, organized “The People’s College” for young people “aspiring to efficiency and eminence in life as architects, engineers, or artisans of any sort.” It never got off the ground.

At long last, these groups looked to the federal government and found a champion in Justin Morrill. The politicking was lively in 1862, but more over land disposal than education. (That is, how would the public lands be allocated?) This was the case even though virtually the same law had been passed in 1859, only to be vetoed by President James Buchanan, who believed that education should be handled locally.

In 1862, “the college bill” passed handsomely, by 32 to 7 in the Senate and 90 to 25 in the House. The process was made easier by the fact that southern states, which were suspicious of federal aid, had seceded. Furthermore, writes Simon, many Congressmen were indifferent to the bill, but once it was clear the bill would pass, “few Congressmen wanted to cast a worthless vote that could be interpreted as a vote against education.” Even then education had a special niche.

Another helpful factor was that the bill’s language was vague, using popular words but not being clear about just what these schools would do and for whom. A key phrase: “in order to promote the liberal and practical education of the industrial classes in the several pursuits and professions in life.” That could cover a lot.

For me, the statement that best captures the goals is from Peter L. Moran and Roger L. Williams: “The measure aimed at extending higher education to previously excluded groups and also at applying the principles of science to the fields of agriculture and the mechanic arts.” Thus there were two sometimes competing goals: bringing new and less-educated groups into higher education and changing the curriculum so it was both more practical and, in the case of agriculture, more scientific.

Once the law was passed, intra-state politicking began—who would get the funds? An existing college perhaps? A new one? To receive the land (or land scrip) state legislatures had to pass a law indicating how it would be used. Since the law provided no operating funds beyond the sale of the public land, there was some attraction to giving the land to an existing school—with the idea that it would modify its curriculum and open its doors to non-traditional students. But others disagreed.

While each state ultimately had at least one land-grant school, that did not happen until after the Hatch Act of 1887 and the second Morrill Act of 1890, which provided operating funds for schools and agricultural experiment stations.

So let me conclude with words from John Y. Simon: “In the very ambiguity of the ‘college bill’ lay the flexibility to enable the colleges to meet changing needs in a changing society.” That’s the optimistic way to look at the history of land-grants. But also consider the statement attributed to Otto von Bismarck: “If you like laws and sausages, you should never watch either one being made.”

Read the original article on aier.org