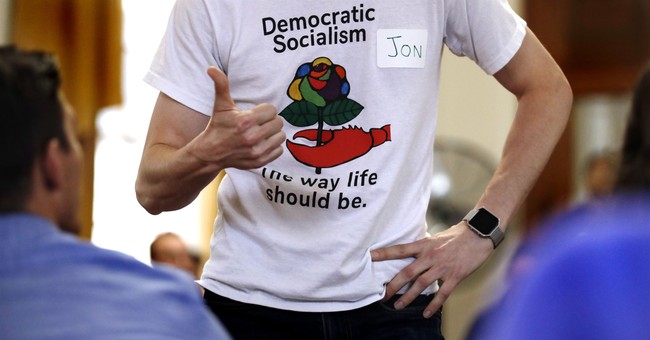 Sam Jacobs is a 25-year-old on a mission. He’s trying to get possession of his trust fund, which holds more than $30 million.

What does he want to do with the money? Use it to destroy the very system that made his trust fund possible: capitalism.

Jacobs is not alone. According to The New York Times article “Silver-Spoon Socialists,” there are legions of young people just like him. The Democratic Socialists of America has recently been transformed from a fringe group of older leftists to a national organization 100,000 strong – with most of its members under 35 years of age – according to the article.

A lot of people Jacobs’ age have lots of money to give away. Citing the consulting firm Accenture, the Times reports that the Silent Generation (those born just before or during the Second World War) and the Baby Boomers will provide their heirs with up to $30 trillion by 2030, and as much as $75 trillion by 2060. A lot of those heirs seem to hate the fact that they are heirs.

“I want to build a world where someone like me, a young person who controls tens of millions of dollars, is impossible,” says Jacobs.

When you are contemplating a conversation with muddle-headed people, don’t expect clarity. But let’s suppose Jacobs’ real objective is to make things better for those at the bottom of the income ladder. How would you advise him to spend his inherited wealth?

Here’s the answer: He should do nothing. Nothing? That’s right, nothing.

Right now, Jacobs’ trust fund money isn’t sitting in a lock box somewhere. It’s a source of funds for the capital market. That means providing seed money for new innovations and paying for the equipment and infrastructure that make workers more productive. Most important of all, capital accumulation is what allows the economy to grow.

There is one thing economists are virtually unanimous about. The single greatest anti-poverty program ever invented – the thing that helps the most people for the longest period of time — is economic growth.

Another way to appreciate this point is to roll back the clock. Only a few hundred years ago, there was very little capital accumulation and there was no economic growth. Aside from a king or queen here or there, virtually everyone was poor. They lived on the modern equivalent of about $2 a day. And that was the way all of humankind lived – going back for a hundred thousand years.

Capitalism (along with the concomitant capital accumulation and economic growth) is the reason why Jacobs isn’t scrubbing around in the forest for roots and berries, wondering where his next meal is coming from.

Could we ever reverse the process? Could we revert to a world in which everyone lives in extreme poverty again? That’s not impossible.

If Jacobs takes his money out of the capital market and gives it to the Democratic Socialists, heaven knows what they will do with it. But odds are it won’t go into the venture capital market or be spent in any other way that would increase worker incomes. If everyone in his generation removed their capital and spent it in frivolous ways, economic growth could be ground to a halt and even regress.

Take Rachel Gelman, a 30-year-old “anticapitalist” who lives in Oakland, California and who is also featured in the Times article. “My money is mostly stocks, which means it comes from underpaying and undervaluing working-class people,” she says.

But where in the economics literature can you find convincing evidence that workers are systematically underpaid? You can’t.

And what does worker pay have to do with stock prices? Virtually nothing. The international rate of return on capital is determined in the world capital market and it tends to be the same regardless of what workers are paid.

Open any introductory economics textbook and the message will be the same. In the labor market, people tend to be paid their marginal product – which is the value of what they produce. Economic studies bear the theory out. There is only one group of people in the private sector who systematically benefit from money they did not earn or merit. They are called heirs.

Some people argue that there is a case for abolishing inheritance. If so, the silver-spoon socialists would have to be Exhibit A.

← Bipartisan Health Reform Q & A on the Labor Market →