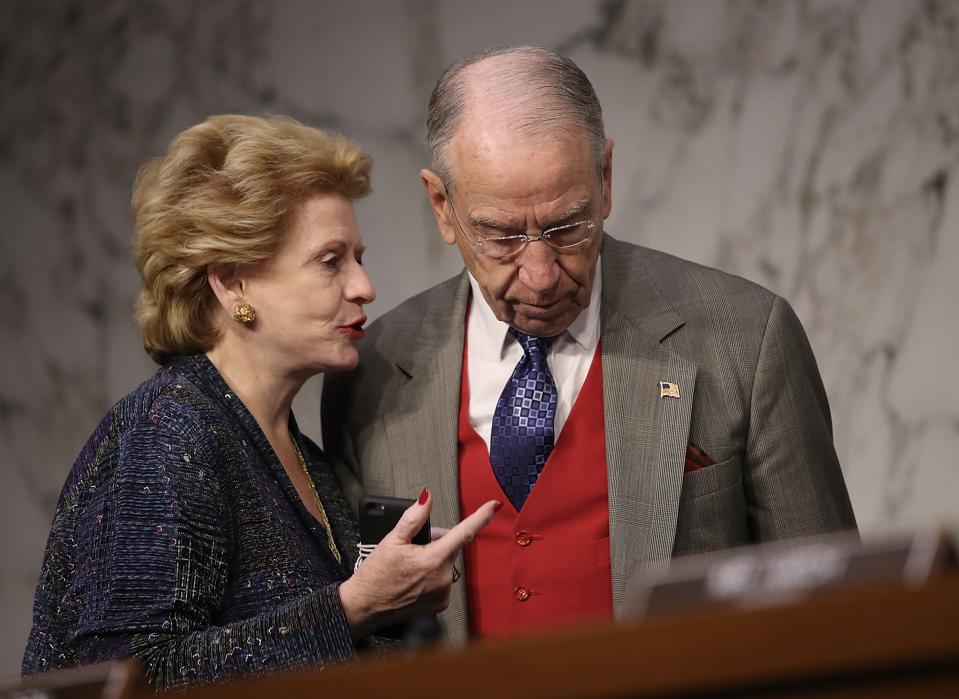 The feature of Obamacare that is least liked by the public is the individual mandate. Under current law, people are required to have health insurance. If they don’t, they can be fined. For example, if you are not insured by an employer plan or a government program (such a Medicaid) you are legally required to buy insurance in the individual market. The type of insurance that is sold there is highly regulated and it probably costs twice as much as it should – or more.

Both the New York Times and the Washington Post ran articles last Friday on how unattractive these policies are in some parts of the country. In Charlottesville, Virginia, for example, a family of four can pay $30,000 a year for coverage with a $14,400 deductible. That’s more than the family pays for its mortgage for insurance coverage that may not pay a single medical bill.

Overall, about 28 million people are currently uninsured and the Congressional Budget Office doesn’t expect that number to change much in the future. That’s a lot of potential fine payers.

However, the law creates a number of exceptions and the Obama administration was quite generous in adding to the list. For example, if a utility cuts off your electricity, if you are evicted for not paying rent, if you have unexpected medical expenses, or unexpected costs of caring for a family member, or if you experience a fire or a flood or other disaster – these are just a few of the ways you can avoid paying the fine.

Surely, we can do better than this.

The argument against the mandate comes straight out of Econ 101. People are presumed to act in their own interest. When they are forced to buy something they don’t want to buy they are a fortiori worse off from their own point of view. The same argument applies to the employer mandate, by the way, which the IRS is only now starting to enforce. Economics teaches that employee benefits (such as health insurance) come at the expense of wages and other benefits. The costs are fully born by the workers. So, an employer mandate is an individual mandate, parading under a different name.

What could that very strong argument be? Let’s consider six of them.

Bad Argument No 1: Without a mandate, people will game the system.

This argument starts with a truism. If I can buy health insurance after I get sick and I can buy it for the same premium paid by everyone else, there is no reason to buy it while I am healthy. Yet if only sick people buy health insurance, however, the premium will be astronomically high. Indeed, the market might experience a death spiral.

This argument appears persuasive until we remember that the exact same conditions apply to Medicare and we somehow deal with the problem without a senior mandate. Medicare Part B and Part D accept all comers regardless of health condition (guaranteed issue) and they charge the same premium to all (community rating). Yet Medicare is in no danger of collapse. How do we do it? If seniors don’t enroll when they are first eligible, they face a premium increase that rises through time. In the Medigap market, failure to sign up when first eligible can result in medical underwriting, where the premium reflects the true actuarial value – or expected cost — of the insurance.

Bad Argument No 2: Without a mandate, people will become free riders.

Even if we didn’t have guaranteed issue and community rating (courtesy of Obamacare), it is argued people can take advantage of the system by never insuring and then relying on free care after they get sick. What makes that possible is the inherent benevolence of the rest of us. We are not going to deny care to people who can’t afford it. So, while the rest of us forgo consumption and use part of our income to buy health insurance, the free rider consumes all of his income and turns to the rest of us to pay for his health care, should the need arise.

Unlike Bad Argument No 1, I think this argument is very powerful. In fact, it explains our entire approach to private health insurance. Basically, we impose taxes on the entire population and then we let people avoid the full brunt of that taxation and keep some of their own money so long as they spend it on health insurance.

As I have said before, the way we do this is unfair, arbitrary and regressive. But put those considerations aside. Most potential free riders are already paying higher taxes precisely because they don’t have health insurance.

The right solution is a universal health insurance tax credit. People who turn down the credit and remain uninsured will pay higher taxes. Those higher taxes should be sent to local safety net institutions in the communities where the uninsured live. If they need care, they should be expected to pay their medical bills. If they cannot, we should draw on the safety net to provide free care.

Done correctly, the uninsured as a group will pay for any external costs they impose on society as a whole.

Bad Argument No. 3: We need healthy buyers to keep the cost of insurance down for the sick.

True enough, if we overcharge the healthy we can undercharge the sick. But why do that? This is an argument for private sector socialism. But it is a strange kind of socialism. It tries to make about 5% of the population (people who buy individual insurance) bear the full cost of a social problem that affects everyone. Granted, there are people who (perhaps through no fault of their own) end up with serious health care problems and no insurance. When this happens, they seek insurance in the individual market. If there is an argument for helping them out (and I think there is), surely the argument applies equally to all 330 million of the rest of us. I can think of no reason for piling the cost of this social obligation on the tiny number of people who happen to buy insurance in the same market.

Bad Argument No. 4: Without a mandate, undesirable market segmentation will arise.

The Trump administration has signaled its support for abolishing the individual mandate. At the same time, the administration appears ready to relax regulations that keep insurers from selling short-term plans (as long as one year) that are not subject to ObamaCare regulations. Bob Laszewski argues that the market would segment very quickly, with radically different premiums for essentially the same coverage. Healthy people would buy the unregulated insurance, paying low premiums until they get sick. Then they would turn to guaranteed issue insurance sold in the Obamacare exchanges.

However, market segmentation is not necessarily a bad thing, provided it is done intelligently. Alaska is lowering its overall costs by providing risk insurance for high-cost enrollees and allowing healthy people to enroll at much lower premiums. Other states plan to follow suit. In fact, it’s hard for me to imagine the Obamacare exchanges ever working properly without segregating the high-cost enrollees and paying for them with a separate subsidy system.

Bad Argument No. 5: Without a mandate, millions of people will become uninsured.

The Congressional Budget Office has predicted that without a mandate, as many as 13 million more people will become uninsured. But as Avik Roy has countered at Forbes, all this means is that lots of people will choose not to buy insurance they deem not worth the premium being charged. According to the CBO, 5 of the 13 million, would drop their Medicaid coverage – implying that 5 million people don’t consider Medicaid worth the trouble of filling out the paper work.

Bad Argument No. 6: Without a mandate, millions of people would pay higher taxes.

Under official accounting rules, the Obamacare subsidies are “tax credits.” So, the Joint Committee on Taxation reports that if the subsidies go away, net taxes will be “higher” for everyone who loses them. Democratic critics have used this fact to argue that Republican tax reform will increase taxes on low-income families. But as Avik Roy has explained, taking the credits away doesn’t mean anyone will be paying more money to the federal government. Or as Margot Sanger-Katz explains in the New York Times, Obamacare subsidies are like a “gift card.” Taking a gift card away is not the same thing as raising someone’s taxes.

Bottom line: there are no good arguments for keeping the individual mandate. But in getting rid of it, we need to clean up a lot of other problems at the same time.

This article originally appeared at Forbes on November 20, 2017.

← Can Donald Trump Cut A Deal With Democrats On Health Care? Maybe. Goodman in DMN: Cutting the corporate tax rate will boost the economy →