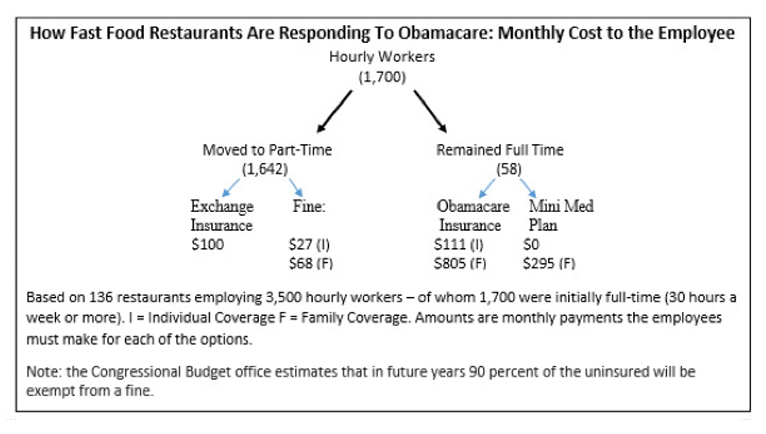 You must have heard the scary scenarios. I have repeated some of them myself. Obamacare threatens to impose a burden on the workplace that is the equivalent of a $6.00 an hour health minimum wage. Employers will lay off workers. Employees will lose their jobs. Failure to provide health insurance will result in a $2,000 or $3,000 fine for every employee affected. The survival of entire industries – fast food restaurants and hotels in particular – will hang in the balance.

So what’s really happening? Not much. The employers and their consultants were smarter than the Obamacare bill writers on Capitol Hill and all the commentators combined. They figured out a way to comply with the law and hold down costs at the same time.

How did they do that? As Andrew Puzder (CEO of CKE restaurants) and I explained in separate Wall Street Journal editorials, employers are making employees offers that they cannot afford to accept.

Take the Golden Corral restaurants in Jacksonville, North Carolina. When owner Billy Sewell sat down to calculate the costs of adding new employees to the company health plan in accordance with the Obamacare mandate, he figured the cost would be in excess of $1 million a year. In fact, only two new employees joined the plan.

Sewell’s experience is not unusual. The law allows employers to charge employees a premium that equals 9.5 percent of wages for self-coverage and the full premium for dependent coverage. The law also allows out-of-pocket costs that this year can be as high as $6,600 ($13,200 for a family), although Sewell’s deductible is only $2,500. When young, healthy, low-income families are confronted with such a choice, they almost always turn it down.

Industry consultants say that among employees like those who work for Sewell, a take up rate of 1 to 2 percent is the norm. And here is the sad upshot: once employees turn down an offer that Obamacare considers “affordable,” they are ineligible for subsidized insurance in the (Obamacare) exchanges.

The employer mandate to provide health insurance begins applying to companies with 100 or more employees this year (it kicks in for businesses with 50 to 99 employees next year). Yet according to a Mercer survey of nearly 600 employers conducted last month:

[T]here was virtually no change between 2014 and 2015 in the average percentage of all employees — full-time and part-time — enrolled in employer-sponsored health plans… While there was a 1.6% increase in the absolute number of employees enrolled, that was the result of a 2.2% increase in the size of the workforce, rather than the changes required by the ACA.

A study by the payroll processing firm ADP sheds light on this phenomenon. Even before Obamacare, the study found that:

And the firm says not much has changed since the law took effect.

Earlier in the year I reported on a study I made of more than 100 fast food restaurants and how the owners reacted to Obamacare.

The first step was to make all hourly workers part time. That may seem like an easy thing to do, but it’s not. In the fast food business it’s not uncommon for employees not to show up for work. That means other employees are asked to work additional hours to prevent the restaurant from shutting down. By year end, 58 employees (out of 1,700) had crossed the line and were eligible for mandated health insurance the following year.

For these employees, the companies offered Obamacare compliant health insurance (Bronze plans), but they asked the employees to pay the maximum premium the law allows: 9.5 percent of their annual wage. For a $9-an-hour employee working 30 hours a week, the maximum monthly premium is $111. Employees are being charged the full premium for dependent coverage, however. For a family of three, the employee faces a premium of $805 a month – almost 70 percent of his monthly wage! (See the chart below.)

The result: out of 58 employees, only one enrolled in a Bronze plan.

Self-insured employers can still do something similar. They can offer a Minimum Essential Coverage (MEC) plan — basically insurance that covers preventive care with no annual or lifetime limits and very little else (no hospitalization, no specialist care, etc.).

The employers in my study offered MEC plans for free to the employees and they had an economic reason for doing so: the Bronze plan costs the employers about six times the cost of an MEC plan. And here is something strange. Employees who sign up for MEC coverage escape the threatened Obamacare fine for being “uninsured.” The employers are also off the hook for any fine because they offered all full time employees a Bronze plan, even if the employees turned it down.

But dependent coverage is not free. In fact, the employee has to pay about 25 percent of his income to cover a spouse and kid. Sadly, If they don’t pay it they will face a fine next April 15th.

This article was originally posted at Forbes on October 22, 2015.

← Why Making A Profit In Health Care Is Good What Republicans Should Be Doing: Holding Hearings On Obamacare →