Why “Testing to Treat” for Covid Isn’t Working 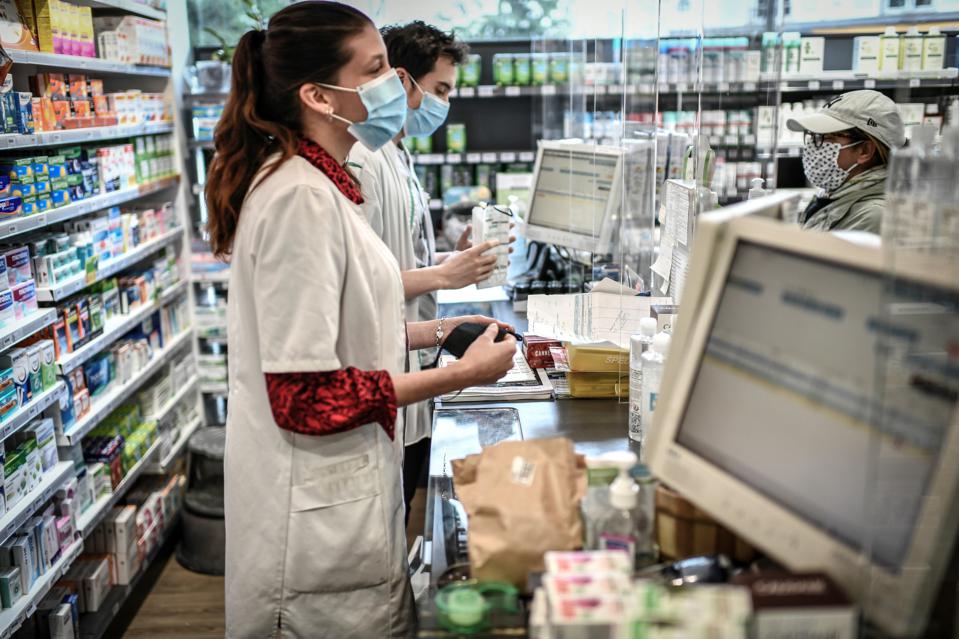 President Biden’s Test to Treat plan will allow people to test for COVID at a pharmacy and if positive, get effective new drugs. But it’s currently dysfunctional. Biden needs to kick ass and make sure Test to Treat is operational and known to everyone particularly pharmacists throughout the country.

We now have wonderful new drugs to treat COVID. Paxlovid, produced by Pfizer, is an example. But half of these medications aren’t being prescribed. Indeed, many go to waste, sitting on the shelves of pharmacies until their expiration dates.

In his State of the Union Address, on March 2nd, President Biden announced his Test to Treat Initiative that will allow people to get tested for COVID at a pharmacy and, if their test is positive, receive a treatment round of Paxlovid or a similar COVID anti-viral “on the spot and at no cost.”

As I write, it’s Saturday. My wife and I started experiencing mild cold symptoms on Monday. Since she was going to visit our 1-year old granddaughter in Brooklyn and I was going to teach at BU, we both started taking daily antigen at-home tests — from different companies — last Saturday. Each test we took was negative through Wed night, in my case, and Friday morning, in my wife’s case. We both had the occasional cough and sneeze. We put the former down to acid reflux and the latter down to allergies.

I wore a mask in class, which I always do, and figured if I was really infectious, the tests would have told me. I, after all, had helped promote rapid home tests in articles co-authored with Harvard epidemiologist, Michael Mina, in the New York Times and the Wall Street Journal. So, they must be reliable.

When I got back home to Providence (yes, a long commute, but when you’re listening to Mike Duncan’s fantastic History of Revolutions, time flies) Wednesday night, I suddenly spiked a low-grade fever and tested again. This time the dreaded second line appeared on not just one, but two different types of tests. So, the home test worked. It just needed my viral load to be sufficiently high.

I called my wife. She tested again when I called. Again negative. But since I was positive, she reserved the first train out of NY. When she arrived Thursday morning, she was feeling warm, having spiked a low-grade fever in the train. She immediately went to the RI testing site. Her antigen test was, yet again, negative and, as a result, they refused to give her a PCR.

She then went to the local Urgent Care. They had a three-hour wait and told her to return at 7:30 AM the next morning — on Friday.

Now for the rest of my story and then back to hers. So, it’s 9 PM, Wednesday. I’m feverish and realize that getting the antiviral, Paxlovir, will only help if I take it as soon as I have symptoms. That’s been, I realized, a couple of days. So, I found a local Walgreens and brought my two positive tests to show the pharmacist.

He said he’d never hear of Paxlovid. Then he thought about it and say, “Oh, yes, the drug’s available, but absolutely none of the Walgreens east of Ohio have it. As for other drugs stores, not likely.” And no, even if he had it, he couldn’t test me, let alone dispense it without a prescription.

It seemed like Test to Treat was, itself, on life support.

I get very motivated when I think I’ve hearing partial or complete bullshit and something important, like my or someone else’s life is on the line. I called my favorite ER — the one at Mount Auburn hospital in Cambridge. They had treated my mom on a number of occasion with amazing skill and compassion. I dialed their number.

The receptionist, a lovely lady, told me she had never heard of Paxlovid and they didn’t dispense it. And who was I exactly?

I realized the receptionist was as well informed as the pharmacist in the Providence Walgreens.

“Pardon me, but is Dr. X (I’m leaving out his name so he’s not inundated with calls.) working tonight?”

“He knows me. He treated my mom. Would you kindly ask him to call me back?”\

Literally, within a minute, Dr. X calls and says, come over. At 11 PM, I’m in the hall meeting Dr. X who checks my oxygen. “Sorry, it’s low. I’ll have to check you in and work you up.”

By 3:30, I’d had a chest x-ray, PCR test, six blood tests, including one for a heart attack (my chest was feeling tight), a bag of saline, which I badly needed, and immediately attained a high oxygen score (the simple devices aren’t, apparently, very accurate). All tests, apart from the PCR, were negative and I was released with a Paxlovid script tightly clutched in my hand.

I was also given the numbers of the three 24-hour pharmacies in the Boston areas. I called two and they said, a) yes, we have Paxlovid, b) yes, we are open, but c) no, we don’t have drive-through windows and, d) sorry, you can’t walk in the store with COVID. Option three, a CVS in Medford Mass, had a drive-through window. It had the drug and, by golly, was open. (Many 24-hour pharmacies are 24 hours in name only.)

A half hour later, it’s 4:15 AM, I’m parked next to the sign on their window saying “Drive-through window closed! Opens at 9 AM.” I ring the bell — five times. Finally, a tired, but kind pharmacist opens the door.

Yes, we have Paxlovid. But our computers are down. Please wait 40 minutes until we reboot.

Back home at 6 AM, my fever is rising. I snarf the pills. A day later, after my second dose, the fever breaks, and I feel close to normal. Maybe it’s luck or my constitution, but, damn, these pills seem miraculous.

Biden needs to kick ass and make sure Test to Treat is operational and known to everyone, particularly pharmacists throughout the country. If this requires ramping up production of Paxlovid and Molnupiravir, Merck’s comparable med, ramp up production!

(An aside: And make enough to supply the rest of the world, which is significantly under-vaccinated. Imagine the benefit this would provide China today, which has, reports have it, locked down to the point of starving to death, millions of Chinese in Shanghai in order to limit disease spread. Apparently, the Chinese vaccine is highly ineffective and the leadership refuses to use Western vaccines. Consequently, it’s trapped, by choice, in a ruinous policy that will lead to never-ending lockdowns. President Xi may find himself out of power if 10 million residents of Shanghai take to the streets and riot or 10 million residents of Beijing start marching to Shanghai to liberate their starving countrymen.)

Not only is Test to Treat currently a hoax, but the situation’s actually worse. Let’s return to my wife who returned to urgent care Friday morning and received a rapid PCR, a rapid Strep, and a rapid Flu test. She was positive on the PCR, and, incidentally, also on the rapid home test she took an hour later.

The Urgent Care physician’s assistant (PA) delivered the bad news and suggested she take Tylenol and Mucinex, but to call if her fever rose above 101 or if she had any trouble breathing. Not a hint that there was an anti-viral available that could help.

The PA responded, “Is that the Pfizer drug?”

The PA then left to check with her boss.

When he returned, he said:

“Love to give it to you, but you need to say yes three times to qualify.”

“Second, you are at risk due to having Rheumatoid arthritis?”

(My wife’s had this for years and it’s well controlled by Plaquenil — the drug Trump was pushing for COVID, but proved too dangerous and ineffective for COVID use.)

“And you’re taking a medication that suppresses your immune system, right?”

At this point, the PA starts violently shaking his head up and down.

My wife smiled, which the PA took as a yes and she came back with a script for Paxlovid. After two doses and 24 hours, my wife is also feeling almost normal. The stuff, from our experience, is unbelievable.

Let’s review the morals of these stories.

First, Test to Treat is dysfunctional. No one knows about it, the pharmacies aren’t participating, and many pharmacies apparently don’t have supplies of the new anti-viral pills. Others are overstocked, with medication that’s going beyond the date of legal usage.

Second, we all need to advocate strongly for ourselves and assume that medical practitioners, particularly physician assistants, nurses, receptionists, and pharmacists, aren’t up to speed on the latest available medications.

Third, Biden and the FDA need to get on the same page. The FDA has approved Paxlovid only for those at high risk of severe disease. It’s time for the FDA to lay out the risks of the medication and let people, or at least their doctors, make the own decision on whether to take the risk.

We are, in the final analysis, all at risk of severe disease. We all know people who were young, able-bodied, had no co-morbidities, and are now dead thanks to COVID. The FDA lists the risks to Paxlovid. The list provides no estimate of the share of Paxlovid users who would suffer these side effects, let alone the severity of the listed side effects (none of which seem life-threatening to me.) Thus, we have yet another example of the FDA seemingly protecting its derriere at the price of the public’s general health.

Fourth, rapid home tests work as advertised — when your viral load is really high — high enough to spike a fever, they go positive. But they work too late to operate in tandem with anti-COVID viral meds that need to be taken at the beginning of infection, not days later when infection is detectable on a strip of paper.

The implication? We need to develop far cheaper rapid home PCR tests than the $75 test now marketed by Lucira. Rapid group PCR testing was the answer my brother, Michael, Provost at Cornell, and I pushed two years ago. It’s likely a major part of the answer today.

Finally, if you have any cold- or flu-type symptoms, you should do whatever you can to get a PCR test, not an antigen test, at your first sneeze or cough. The fact that you aren’t antigen-test-positive may well mean you aren’t yet contagious (our granddaughter and my stepdaughter tested PCR negative today), but you need a quick PCR result to know if you should start the anti-viral meds.

But getting anti-viral meds right now is a different story. It may require telling an urgent care doc that you are at severe risk (Aren’t we all?), you have a co-morbidity (Surely something will kill you!), and when asked if your immune system is compromised on its own or via the use of immune-suppressing medicine, it can’t hurt to smile your biggest smile and move your head in a particular direction.