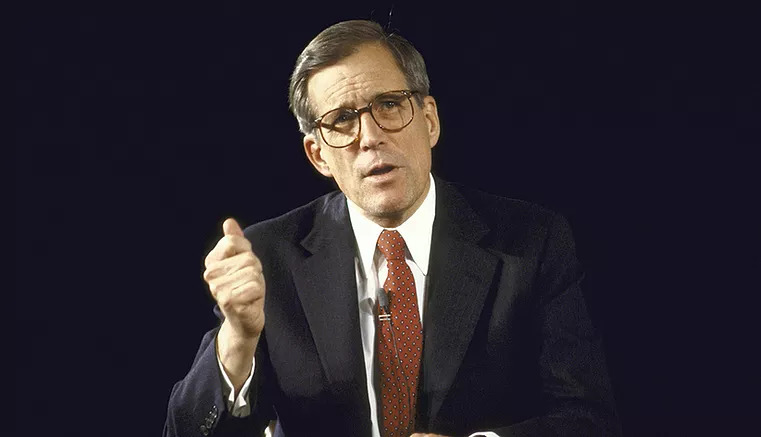 du PONT, Pete Pierre S. “Pete” du Pont IV died on Saturday at the age of 86.
Du Pont served three terms in Congress, and then became a two-term governor of Delaware, from 1977 to 1985.

Working with a Democratic-majority state legislature, he managed to enact two income tax cuts and measures to restrain state spending. In 1981, he signed landmark legislation that deregulated the interest rates charged by financial firms. Credit card companies and other financial institutions flocked to Delaware as a result, and they became an important part of the Delaware economy. The act was credited with spurring the growth of MBNA, JPMorgan Chase, Bank of America, Discover, Capital One, Barclays, and others.

In 1988 he ran for president on a platform that included school choice, welfare reform and Social Security privatization. Although his bid was unsuccessful, his ideas appealed to others. Congress passed welfare reform under President Clinton. George W. Bush created a bipartisan commission that recommended private Social Security accounts. And school choice experiments sprouted in practically every state. One of his advisors was economist John C. Goodman, president of the National Center for Policy Analysis (NCPA) in Dallas.

Following his presidential run, du Pont joined the NCPA and became its chairman from 2004 to 2012. Under his leadership, the NCPA championed such ideas as Health Savings Accounts, Roth IRAs, and letting seniors continue working without losing their Social Security benefits. All three of those proposals became law. A forum to promote these and other innovative reforms was William F. Buckley’s Firing Line program. Goodman and DuPont appeared on about two dozen programs, including a number of two-hour debates where they teamed with Buckley to debate such liberal opponents as former presidential candidate George McGovern, Sen. Jay Rockefeller and economist Lester Thurow. Topics included “replacing the income tax with a flat tax” and “abolishing the welfare state.” A number of them took place at Texas venues, including debates at Texas Christian University and the University of Dallas. “Pete was one of the very few politicians who could debate serious topics with serious people and hold his own along the way,” said Goodman.

The motto of the NCPA was “Making Ideas Change the World.” Du Pont aggressively promoted reform ideas that emanated from the NCPA. He also searched for good ideas from others, regardless of their political leanings. As part of the NCPA’s speaker series, he interviewed Supreme Court Justice Clarence Thomas, news anchor Walter Cronkite, Queen Noor of Jordan, and others. These interviews were often covered by C-SPAN, where du Pont appeared 58 times. In 1996, du Pont joined with Goodman and Peter Orszag, to make the case for pension reform. Orszag was an economist with the Brookings Institution who later became Congressional Budget Office Director and then Chief Economist for President Barack Obama. The three managed to bring Republicans and Democrats together to pass legislation allowing employers to enroll their employees in 401(k) plans with diversified portfolios so that those employees would have larger and safer accumulations during their retirement. An estimated 16 million employees are now benefiting from this reform.

“Pete du Pont was a man of ideas. He didn’t do a poll of voters to decide what he stood for. He searched for reforms that work and then tried to coax the public to follow him. He was one of the truly remarkable political leaders of the 20th century,” said Goodman.