Goodman: Why we are Divided 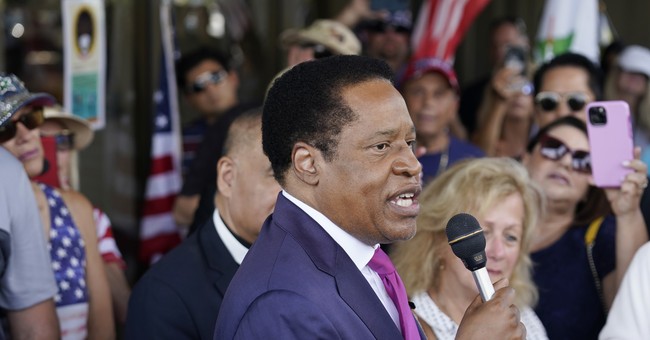 Larry Elder is a talk show host who is running for governor of California. On September 14, California voters will have the opportunity to recall their current governor, Gavin Newsom. Should that happen, voters will choose Newsom’s replacement on the same ballot. If current polling is anywhere near accurate, the likely winner will be Elder.

The liberal media is panicking over the prospect. An editorial in the New York Times by Farhad Manjoo, for example, declares the Elder candidacy a “looming disaster,” a “liberal nightmare” and a possibility that is “as serious as a heart attack.”

For Times editorial writer Paul Krugman, the possibility is even more frightening. Elder, he says, would be a “Trumpist governor” whose election would produce “awesome consequences” – all bad, of course.

Elder’s candidacy is an ideal opportunity to investigate why the country is so divided politically and why it is so difficult to have civil conversations about politics. But first things first.

Why is Elder running for governor? He has a website that tells you. His main issues are: homelessness, crime, education and high taxes. For anyone who has been paying attention to California in the news, these issues should come as no surprise.

So, what does Manjoo have to say about rampant homelessness in California? Nothing. Nothing? Not a word. What about crime? Zero. High taxes? Nada. What about poor kids taught by bad teachers in bad schools? Zilch.

Manjoo does mention a few issues, including abortion and the minimum wage. But these are not policies the governor can unilaterally change, and even if he could they would have no impact on most Californians. Hardly the stuff of a “liberal nightmare.”

The practice of attacking a candidate without ever saying why he is running or what he would do if elected is not confined to the New York Times’ editorial page. The same practice is found in regular news stories. And although the Times may represent modern journalism at its worst, other news outlets are almost as bad.

What we read in the newspaper and see on television shapes the way many of us talk about politics ourselves. And that’s unfortunate.

Thanks to this special election on the West Coast, we have in full view two of the reasons why families find it so difficult to have rational conversations about politics when they gather for Thanksgiving dinner: (1) people don’t listen to each other and (2) they talk past each other.

Perhaps you haven’t noticed, but there is no such thing as a real candidate debate any more. When opposing candidates appear side by side in front of television camera these days, they almost never answer their opponent’s arguments in an attempt to win debating points.

Instead, their responses are carefully crafted to pivot on any topic and direct an appeal to a group of voters who have a special interest in the issue. Moderators almost always let them get away with this. So, political debates don’t give you a clash of views. They give you a clash of TV commercials.

This style of conversation inevitably carries over to the viewing public. That’s why dinner-table arguments are often just as pointless as the actual candidate debates.

There is a third reason why rational political discussions have become almost impossible in modern times. It wasn’t that long ago that Republicans and Democratic candidates would say, “We agree on the problems, but we disagree on the solutions.” Note: you can remain very civil and yet disagree on solutions.

That is no longer the case.

In other words, they blamed ideas and policies, not the people who advocated them. That is no longer true.

Today, Elder and many of his supporters believe that California’s problems go beyond liberalism in general. They are also likely to believe that politicians like Gavin Newsom are the cause of poverty, homelessness, crime, poor educational outcomes and economic dislocation.

Similarly, liberal commentators in the past may have believed that conservative attitudes contributed to racism and lack of opportunity for the downtrodden. But they didn’t personalize this belief.

Yet the liberal media in California today doesn’t just believe that Elder holds wrong views. They accuse him of being the cause of the very problems they think need to be solved. “Larry Elder is the Black face of white supremacy,” declares a writer for the Los Angeles Times. He doesn’t just hold wrong views, he “is a threat to Black Californians,” she writes.

The reaction to Elders is by no means unique. Rep. Alexandria Ocasio-Cortez says she blames Sen. Joe Manchin for the death of 12 of her constituents because of his ideas on global warming.

It’s hard to remain civil when you are convinced your opponent is the cause of the very problems that need to be solved.

← Kotlikoff: Why is the FDA Harming our Kids? It's time to rapid home-test every American every day →