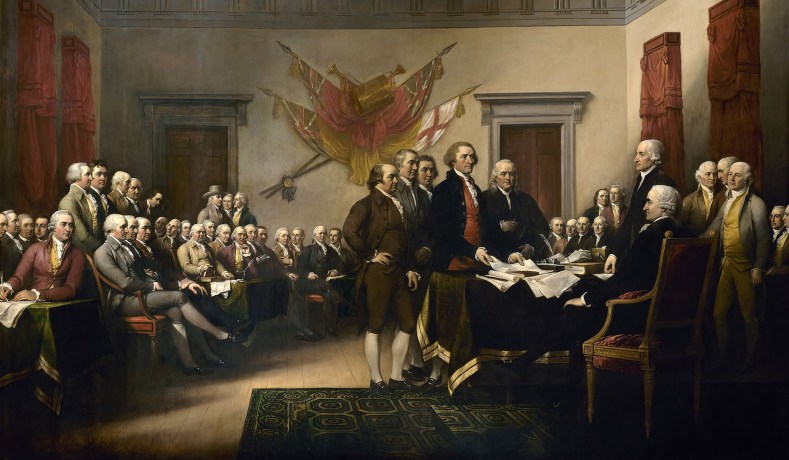 A great divide has the movement at war with itself.

Conservatism is having an identity crisis.

When a movement’s flagship publication features a “This We Believe” statement on its cover, as National Review recently did, you know there’s a problem. But the problem itself is not new.

Last summer, The American Conservative published a special edition devoted to the question, “What Is American Conservatism?” The issue drew on essays by dozens of self-identified conservatives, each attempting to define the movement. Reading through them, one might get the impression that conservatism is not one point of view but a whole slew of them. Yet in truth, there is only one important intellectual schism on the right worthy of attention: that between those who embrace the legacy of the European Enlightenment and those who reject it.

The Enlightenment, or the Age of Reason, was the revolution against the institutions of statism and superstition that freed human minds and human relationships in the 16th and 17th centuries. As Steven Pinker has aptly noted, the free minds and free markets that resulted from this revolution are the reason for the relative prosperity and security we enjoy today.

I can only imagine how liberating and exciting it must have been to have lived through that time when David Hume, Adam Smith, Thomas Jefferson, and America’s Founding Fathers were overthrowing an old intellectual and political orders and creating new ones. I like to think it must have felt similar to the 1980s of Margaret Thatcher and Ronald Reagan, when ideas such as the flat tax, school vouchers, private Social Security accounts, deregulation, and privatization were sweeping the globe, promoted with palpable energy and enthusiasm by a raft of newly created conservative think tanks.

A decade later, as the 20th century came to a close, Communism and big government were in retreat, and free-market reforms remained ascendant everywhere. But alas, the 21st century has seen considerable backsliding, which has fueled the rise of those on the other side of the conservative schism: the folks who reject the legacy of the Enlightenment.

This school of thought is aptly represented in What Is Conservatism?, the classic essay collection edited by Frank Meyer and published a little over 55 years ago. I recently reread the book, seeking to find anything in it that might engage a politically agnostic college student, making him eager to be part of the conservative movement. Sadly, I came up empty.

The kind of conservatism pushed by What Is Conservatism? doesn’t just fail to win converts; it also isn’t prepared to solve real-world problems. About the same time that Meyer’s book was published, Milton Friedman published Capitalism and Freedom. The two books are as different as night and day. Whereas the essays Meyer edited are backward-looking, Friedman’s book is forward-looking. Whereas the former lamented change, the latter called for the kind of change that liberates people and makes their lives better.

Friedman was well aware that his approach to public policy was very different from that of conventional conservatives. He even avoided calling himself a “conservative,” preferring to identify with the tradition of classical liberalism. But his ideas came to dominate American conservatism anyway, at least until the development of the movement’s present schism. And for those of us who still believe in them, there is much work to be done going forward.

In every large city in the country, large numbers of low-income minority families are forced to live in substandard housing and send their children to failing schools. They benefit the least from almost every public service, from transportation to health care to public safety. They are also denied job opportunities by medieval-style occupational-licensing laws. These cities are almost always run by Democrats, usually liberal Democrats. A reformist conservative agenda would advocate school choice, the liberation of the housing and job markets, and private alternatives to essential city services.

Likewise, too many American seniors are trapped in antiquated social-insurance schemes that should be an embarrassment to a civilized society such as ours. They are misled on a daily basis by Social Security bureaucrats who encourage them to take early retirement, giving up benefits that are growing at a 3 percent, no-risk, real rate of return every year. Then when they do take a part-time job, they face the highest marginal-tax rates in the nation — as high as 95 percent in some cases. Seniors on Medicare are the only people in the country who cannot have a health-savings account or direct, 24/7 access to a primary-care physician as an alternative to the emergency room. As I argue in my book New Way to Care, we desperately need to reform Social Security, Medicare, Medicaid, the disability system, and other forms of social insurance that were designed in a different century to meet different needs.

These are only a few of the ways in which an activist conservative agenda could liberate people and markets, reform institutions, and make the world better for the most vulnerable among us. But for that to happen, the conservative movement will first have to decide whether it wants to embrace its Enlightenment roots or reject them.

Read the original article on nationalreview.com

← Father of Health Savings Accounts Says We need One, Universal Account Who is Getting the Vaccine? →