The Goodman Institute for Public Policy Research is doing things that are not being done by any other organization. We are supplying Congress with the very best advice the scholarly world has to offer on health reform and tax reform. If the Trump administration is willing, we can do the same for entitlement reform.

John Bardis, who has worked with John Goodman and his colleagues for over two decades – especially on health and education issues – was a member of the Goodman Institute Board of Directors. He has accepted a position as the Assistant Secretary for Administration at the U.S. Department of Health and Human Services.

Bardis founded MedAssets almost two decades ago. The company provided health care financial services to 80 percent of all the hospitals in the country and to more than 100,000 healthcare providers.  Bardis was recognized by Modern Healthcare as one of the “Top 100 Most Influential Leaders in Healthcare” for four consecutive years.

“John is in an ideal position to bring solid advice on health policy to Secretary Tom Price and other members of the Trump Administration,” said Goodman.

Board Goes to Washington

The Goodman Institute Board of Directors held its March meeting at the Capitol Hill Club in Washington, DC. Former Congresswoman Nan Hayworth guided her fellow board members around Capitol Hill.  Sen. Bill Cassidy, the Republican’s point person on health care in the Senate, recounted the many ways in which he relies on the Goodman Institute for Public Policy Research and thanked the board for their leadership on the health care issue.

GI Scholars Are the Basis for Tax Reform 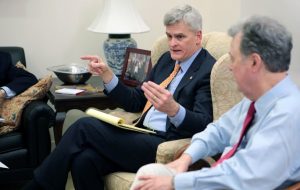 Most of the ideas in the Ways and Means plan for tax reform come from the work of two scholars: Laurence Kotlikoff and Alan Auerbach. That is not surprising. These two have revolutionized the way economists think about fiscal policy.

To analyze tax reform, Kotlikoff and his colleagues developed a first-of-its-kind model of international capital flows and they showed that the burden of the corporate income tax is born almost entirely by labor. During the election, Kotlikoff used his model to evaluate Donald Trump’s proposal for a 15% corporate flat tax. The result: a huge inflow of capital and an increase in the average wage of about $4,000 per family per year. 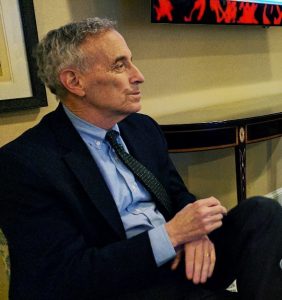 The proposal being considered by the Ways and Means Committee is more like a value-added tax, but it would also lead to large capital inflows and an increase in wages. Using a state-of-the-art model for measuring such things, Kotlikoff and Auerbach have discovered that the Republican proposal is not a giveaway to the rich. It is almost as progressive as the current system, even as it raises incomes for all workers.

They propose instead to allow people a tax credit for enrolling in group insurance through an employer – where the premiums are often lower and the benefits better.

Employers would have the option to continue under the current tax system (purchasing insurance with pre-tax dollars) or the tax credit system. They would also be able to help their employees obtain insurance in the individual market or in the group market.

The proposal would also do something else no other proposal does. If there remain any uninsured, some portion of unclaimed tax credits would be sent to safety net institutions in the communities where the uninsured live in case they cannot pay their medical bills from their own resources. People would have access to health care, even if they lack health insurance.

The authors say that with a tax credit independent of income, electronic enrollment would be easy, using off-the-shelf technology. States could use existing systems to automatically enroll people – making them insured unless they choose to opt out.

The authors also say that they believe that the goal of universal coverage can be achieved with money already in in the system. “We don’t need any new taxes or any new spending,” they write. 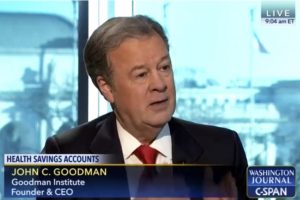 John Goodman was a featured guest on C-Span in February. He talked about Health Savings Accounts and how they will be expanded under any Republican plan to overhaul the Affordable Care Act. The back and forth with callers was lively.

Speaking to Wall Street analysts and health care industry specialists in New York City in February, John Goodman said that Republicans in Congress will not be successful in replacing Obamacare if they take insurance away from millions of people. Instead, “They should take the $2 trillion the Democrats have put on the table of health reform and use it to fund a universal tax credit.”

Kotlikoff has a Syndicated Column

After 40 years of writing a nationally-syndicated column, Scott Burns has retired. Laurence Kotlikoff has taken over the weekly column, providing his insight into personal finance as well as public policy issues. Recent columns have offered readers advice on investing in the stock market and tips on how to reduce their taxes.

Henderson and Hooper on Why Drug Prices are so High

According to Stanford University economist David Henderson and his colleague Charles Hooper, drugs in the United States would be much cheaper if we did some of the following: 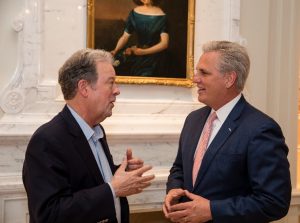 Goodman in the WSJ: Congress Has Already Found the Answer to Obamacare

Writing in the Wall Street Journal in January, John Goodman said the replacement for Obamacare is in The CURES Act, which passed with huge bipartisan majorities in both houses of Congress. Although the act was mainly focused on giving patients access to life saving drugs and medical devices in the future, it had an immediate impact on small business:

One way to think about the Sessions/Cassidy legislation (largely created by Goodman Institute scholars) is to see that it will extend these same features to the rest of the health care system.