A Conservative Approach To Health Reform 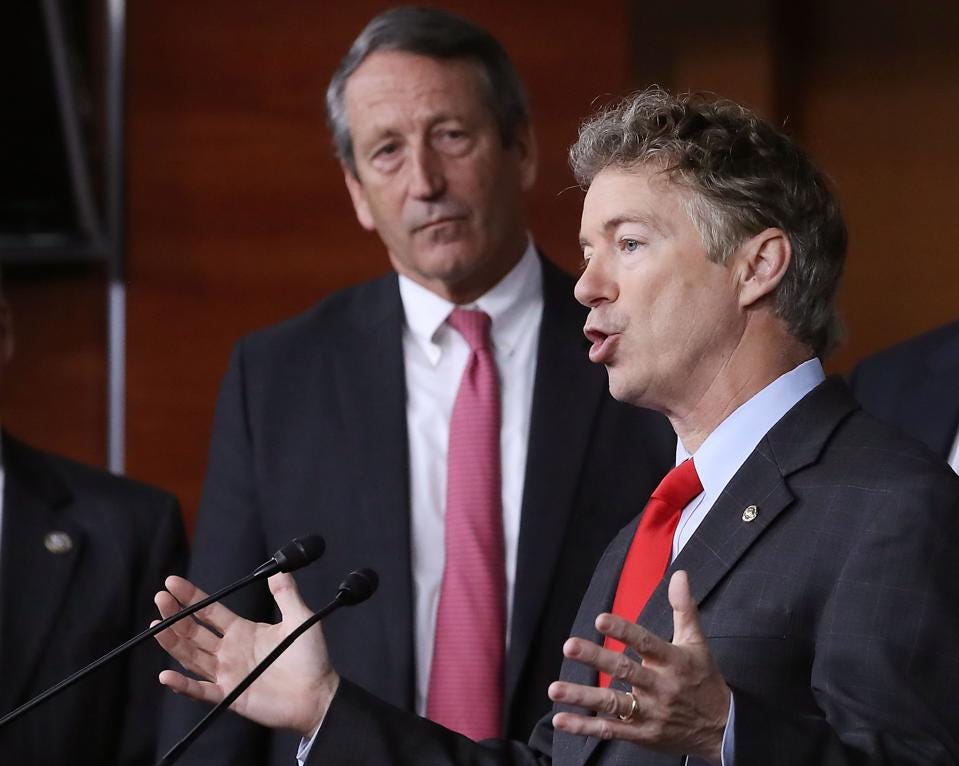 Originally posted at Forbes, March 2017.
Sen Rand Paul (R-KY) says he can‘t support a health reform now being considered by the leadership in the House of Representatives. He predicts that many conservatives in Congress will agree with him.

So, what would he support? What should conservatives in general support when it comes to health care?

I believe there are three reforms that are consistent with individual empowerment and limited government: (1) a universal health refund that transfers all government tax and spending subsidies to ordinary citizens every year with no strings attached other than the requirement that it be used for health care, (2) a flexible health savings account so that money not spent this year can be saved tax free for future medical expenses and (3) protection for people who lose their insurance because of government policies.

Universal Health Refund. If we take all tax breaks used to subsidize health insurance in the work place, all of the funds currently spent under Obamacare and all of the federal dollars used to subsidize indigent care, it amounts to more than $2,000 per person for people not covered by a government insurance program. That’s more than $8,000 a year for a family of four. Let people take this money and shop in an unfettered market for health care and health insurance.

This approach would leave the total amount spent on health care roughly at the level where it is today. But it would minimize the role of government and maximize the role of individual choice and competition in the marketplace.

If this idea sounds vaguely familiar, it should. Last year Charles Murray, writing in the Wall Street Journal, argued that we should replace our entire welfare system with an annual gift that would amount to $13,000 for every adult. Many regard Murray’s idea as impractical. But applying the idea to health care has a well-established pedigree in conservative and Republican circles.

For well over a decade House Speaker Paul Ryan (R-WI) has been a steadfast supporter of replacing current tax and spending subsidies for health care and health insurance with a universal tax credit. John McCain ran on this idea in the 2008 election. The legislative embodiment of McCain’s plan was the Patients Choice Act, which Ryan cosponsored in 2009 along with David Nunes (R– CA) in the House and Tom Coburn (R–OK) and Richard Burr (R–NC) in the Senate.

This idea can provide a firm foundation for conservative health reform going forward.

What about employer-sponsored insurance? Employers would be free to offer insurance to their employees just as they do today. The only thing that would be change would be the way the federal government encourages insurance. Instead of excluding employer contributions from taxable income, employees would receive their annual health refund instead. To ease the transition and minimize problems, employers could be given a choice – stay in the current system or let their employees claim a health refund.

Also, employees who find their employer offer unattractive would be able to use their health refund to buy insurance in the individual market.

What about Medicaid? State governments should be encouraged to convert their enrollees to private insurance – which is personal and portable and gives people access to better care. They could do this by allowing their beneficiaries to combine the state’s share of Medicaid with the universal health refund to enroll in an employer plan or buy health insurance directly.

What about Obamacare taxes? Revenues raised under the Affordable Care Act would be returned to the people by means of the heath refund, along with all other federal tax and spending money. Remember, most of these revenues come from special interests who agreed to be taxed because they expected to profit from Obamacare – drug companies, insurance companies, big business, etc. But those who really want to see all these taxes go away won’t be disappointed. They are all going to vanish as part of tax reform.

A Flexible Health Savings Account. Ideally, this account should be a Roth Account that wraps around any third-party insurance plan. Unlike today’s highly regulated system, there would be no across-the-board deductible. People would be free to enroll in health plans which allow them to manage all their primary care dollars, without restriction. Health plans would also be able to make special deposits to the accounts of chronic patients who agree to manage their own care – especially where self-management of care is shown to be more effective than traditional doctor therapies. Patients would also be able to use their HSAs to pay the fees of concierge doctors, or providers in “direct-pay” arrangements.

Protection for People Who Lose Their Insurance Because of Government Policies. No one should be allowed to game the insurance system by remaining uninsured while healthy and then enrolling after they get sick for the same premiums healthy enrollees pay. Such people should face premiums that are actuarially fair. But many people today have insurance that is not personal or portable because of a tax law that subsidizes group insurance and penalizes individually owned insurance. That means that when they leave their job, after many years of paying premiums, they can face very high rates from a new carrier because of a health condition. Since government causes this problem, we must look to government to solve it.

People transitioning from the group market to the individual market should not be penalized because of a pre-existing condition. Risk pools and reinsurance are acceptable ways of minimizing the cost of the transition. However, no one should be able to game the system. Once in a plan, people should pay a full, actuarially fair price for any upgrade in coverage and they should receive a full, actuarially fair rebate for any downgrade.

Also, health plans should not be able to dump their sickest, most costly enrollees on other plans – as is happening in the race to the bottom in the Obamacare exchanges. Instead, the orginal plan must top up the premium to the new plan so that the latter receives a total revenue equal to the expected cost of care. This is a system I call “free market risk adjustment.”

The Way forward. The principles outlined here have been ignored in virtually every Republican health reform proposed in the past three years. The exception is a proposal by Rep. Pete Sessions (R-TX) and Sen. Bill Cassidy (R-LA). This proposal would provide a minimum amount of health insurance to almost everyone and it would give the private sector new tools to control costs. We have described it at Health Affairs.

This article was originally published at Forbes on March 6, 2017. http://bit.ly/2meK6nR

← Do Republicans Have a Death Wish? Republican Health Care Fiasco →