The US Is Rationing Life Saving Drugs 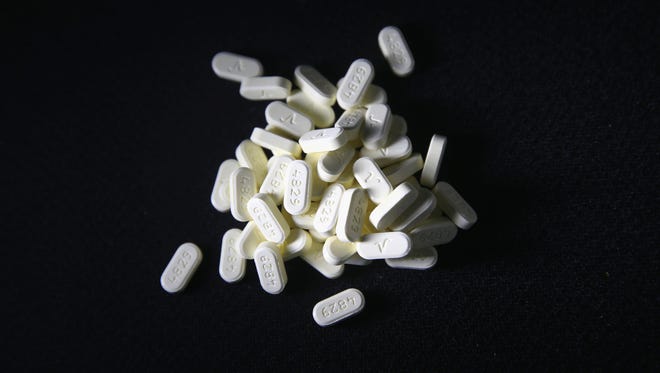 Here’s a warning for Hillary Clinton, Bernie Sanders and Donald Trump. Before getting government more involved in controlling drug prices, take a close look at the mistakes that have already been made (and that are not being corrected) and the human suffering these mistakes are causing.

In hospitals, clinics and doctors’ offices around the country medical doctors are dealing with a problem that you might expect to find only in an undeveloped country: a shortage of drugs – often lifesaving drugs. I first wrote about this problem in Health Affairs five years ago. Since then, the problem has only grown worse, as the chart below shows.

These drugs are often generic drugs and they are usually not very expensive. Cancer drugs, for example, are typically injected by a doctor, who purchases them and then re-bills Medicare. But because of Medicare’s price controls, when shortages occur they are not eased by market clearing prices, as they would in other markets. As a result, providers sometimes turn to more expensive and often less appropriate brand drugs. More often than not, patients are simply denied the treatments they need.

Take BCG, the treatment of choice for bladder cancer. Don Keating is a Boston patient who had to wait about six months before obtaining the drug, during which time his cancer recurred, according to The New York Times. Peter Loftus, writing in the Wall street Journal reports that “thousands of patients who depend on BCG have resorted to tracking online message boards, calling hospitals and traveling hundreds of miles to find supplies.”

Overall, The Times reports that:

In a survey of cancer doctors conducted in 2012 and 2013, 83 percent of respondents who regularly prescribed cancer drugs reported having been unable to provide the preferred chemotherapy agent at least once during the previous six months. More than a third of them said they had to delay treatment “and make difficult choices about which patients to exclude,” according to a letter published in The New England Journal of Medicine.

When drugs are in short supply, who gets them? That depends. In some places, it’s first come, first served. In other places age is a factor – children may be selected over adults for chemotherapy, for example. Weight can be a factor, since an obese patient can require three times as much antibiotic as a normal patient. Often, the decision is made based on the personal preferences of the doctor.  As one doctor told the Times, these decisions are not easy:

We kept coming back to wow, we’ve got that tragic choice: two kids in front of you, you only have enough for one. How do you choose?

When patients are denied access, the consequences for patients can be “increased pain or nausea when drugs typically used to control symptoms are withheld.” Other patients may have to undergo invasive surgery to control cancer when anti-tumor medications are delayed. When doctors turn to less preferred alternative drugs the consequences can also be bad. According to the Times:

Studies have associated alternative treatments during drug shortages with higher rates of medication errors, side effects, disease progression and deaths. For example, children with Hodgkin’s lymphoma who received a substitute to the preferred drug had a higher rate of relapse, researchers found, and adults with a genetic disorder called Fabry disease had decreased kidney function when their medication was cut by two-thirds.

So why is all this happening?

One reason is Part B price controls, instituted by the Medicare reform bill of 2003. Writing in The New York Times, Zeke Emanuel explains:

In the first two or three years after a cancer drug goes generic, its price can drop by as much as 90 percent as manufacturers compete for market share. But if a shortage develops, the drug’s price should be able to increase again to attract more manufacturers. Because the 2003 act effectively limits drug price increases, it prevents this from happening. The low profit margins mean that manufacturers face a hard choice: lose money producing a lifesaving drug or switch limited production capacity to a more lucrative drug.

A different kind of price control is created by a little known program that forces drug manufacturers to give discounts to certain end users. The federal 340B drug rebate program was created in 1992 to provide discounted drugs to hospitals and clinics that treat a high number of indigent patients. Since then the number of institutions who qualified for these discounts has greatly expanded, aided in part by the Affordable Care Act. In 2002, about 8,000 hospitals and clinics were in the program. By 2010 more than 14,457 were participating. The total number of eligible hospitals and clinics is now estimated at nearly 20,000.

There are other factors: too much unwise regulation, stockpiling, black markets, etc.

Although they are several years old, I still think the best two pieces on the problem are Zeke Emanuel’s editorial in The New York Times and my post at Health Affairs. 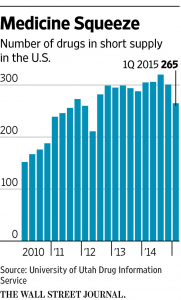 This article was originally posted at Forbes on February 2, 2016.

← Almost Everything You’ve Been Told About Inequality Is Wrong Krugman Recants On Heath Care; The Left Is Apoplectic →