Congress did a big favor last week for about one third of seniors on Medicare, roughly two-thirds of low-income families on Medicaid, people who are getting insurance in the (Obamacare) exchanges and everyone else with private insurance – whether obtained at work or on their own. What did Congress do for all these folks? It delayed the imposition of health reform taxes.

But wait a minute. Didn’t Barack Obama promise no new taxes on anyone who isn’t “rich”? He did indeed: Here is Obama’s 2008 campaign promise:

I can make a firm pledge under my plan, no family making less than $250,000 a year will see any form of tax increase. Not your income tax, not your payroll tax, not your capital gains taxes, not any of your taxes.

In fact, if you watch the video, you will see that this promise was every bit as emphatic as George H.W. Bush’s “read my lips” pledge, two decades earlier. The difference: to my knowledge not a single reporter has ever asked President Obama why he reneged.

[Sidebar: Hillary Clinton – who advocates even more Obamacare subsidies — made exactly the same pledge in the Democratic presidential debate on Saturday night, with the same read-my-lips type assurance. That prompted liberal commentator Matthew Yglesias to accuse her of reflecting

a certain amount of intellectual bankruptcy in contemporary American liberalism. It’s an ideology that stands for the creation of new government programs but won’t stand up for the idea that these programs are actually sufficiently valuable to ask people to pay for them.

Yglesias went on to call her tax pledge “bad news for progressive politics.” By contrast, Bernie Sanders is willing to tax everybody to fund parental leave. But he is not going to be the nominee.]

There are 21 new taxes created by the Affordable Care Act (Obamacare). Economist Chris Conover calculates that only 30 percent of the revenue will come from taxes that explicitly target the rich. (See the graphic below.) The rest are imposed irrespective of income. In addition, a large part of the cost of Obamacare is paid for by cuts in Medicare spending — a burden born by the elderly and the disabled. Moreover, the cost of caring for high-cost patients is being shifted to healthier buyers of insurance through community rating.

Add the Medicare cuts to the taxes and less than 20 percent of the cost of Obamacare is being born directly by high-income taxpayers. Throw in cost shifting and l would guess the burden for the rich falls below 10 percent.

One way to look at all this is to see that burdens for the poor and the middle class are imposed through stealth taxes, stealth budget cuts and stealth cost shifting. Yet all the stealth in the world can’t change reality.

Except for the subterfuge, the Democratic Party in the United States has followed the pattern visible throughout Europe. It creates broad-based social insurance programs and pays for them with regressive taxes – primarily taxes on consumption and labor.

Yet last week, without changing promised benefits by one iota, Congress voted to delay these taxes (at a cost of $36 billion) in the following way:

The big ticket item is Obamacare’s tax on health insurance – which amounts to $145 billion over the next ten years. It may surprise readers to learn that this tax is imposed on Medicare Advantage plans, which insure almost one third of all seniors. It also falls on private plans that contract with state governments and insure about two-thirds of all Medicaid enrollees nationwide. And not to be overlooked are companies and unions that pay medical bills for their members directly and don’t buy health insurance at all!

As the Congressional Budget Office has noted, this tax will result in increased premiums for the buyers of health insurance. Conover explains what this means:

Oliver Wyman, a well-known international consulting firm, has estimated the health-insurers tax alone is expected to increase premiums for single coverage by a minimum of $2,150 over the next 10 years while boosting family premiums by $5,080 during the same period. Even older people on Medicare Advantage plans, who tend to have lower-than-average incomes, will see premiums go up by $3,590 over 10 years according to the Oliver Wyman calculations.

The next big ticket item is the Cadillac plan tax, which imposes a 40 percent tax on plans to the extent that they exceed $10,200 (individual) and $27,500 (family) beginning in 2018. This tax has been portrayed as a tax on especially lavish plans. However, the thresholds are indexed by the consumer price index, not medical inflation; and in calculating plan costs, the government adds in employee premium payments, and employee deposits to Health Savings Accounts and Flexible Spending Accounts.

As a result, Towers Watson estimates that almost half of all employer plans will be vulnerable in 2018 and 82 percent will be vulnerable by 2023. As I explained to USA Today, “Any company or union that pays a Cadillac tax is not very smart.” The reason: companies can avoid the tax by spending less on health insurance and more on wages or other benefits. But these avoidance techniques are not free.

In fact, the CBO estimates that the tax will bring in $91 billion over ten years – mainly because of the shift from health insurance to taxable wages. 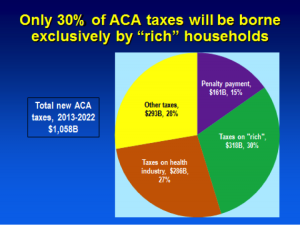 This article was originally posted at Forbes on December 21, 2015.