I believe the time has come for the Nobel Prize committee to consider rescinding Paul Krugman’s award. His columns in the New York Times are supposed to give us insights into public policy issues based on economics. But increasingly they ignore everything economists know. All too often they present viewpoints that are the opposite of what economists know.

Take government regulation of business. Writing in the Wall Street Journal, Jeb Bush had this to say:

The increased cost of new regulations, in time and money, has been phenomenal. According to the American Action Forum, since Mr. Obama took office, new regulations have resulted in an additional 443 million hours of paperwork each year for Americans. All told, according to the Competitive Enterprise Institute’s 2015 report on the federal regulatory state, regulations impose a $1.88 trillion silent tax on the U.S. economy each year—that’s nearly $15,000 per family. For every second of his presidency, Mr. Obama has added roughly $3,100 in regulatory burdens to the economy.

It’s time we did a better job regulating the regulators.

Who could quibble with that? Krugman for one. He begins last Friday’s column with this nugget:

The former president of a peanut company has been sentenced to 28 years in prison for knowingly shipping tainted products that later killed nine people and sickened 700.

This, according to Krugman, is a prime reason for why we need more government regulation.

Now, every school child knows that an important function of government is to prevent people from killing, robbing, raping, defrauding, etc. When government does these things we don’t call it “regulation.” We call it “crime prevention” or “law enforcement” or “police protection.” Every society there has ever been has considered force and fraud a crime and every society has governmental institutions to prevent or punish these activities.

What do economists know about it? A great deal. One thing we know is that a great many regulations impose costs on the private sector without creating any corresponding benefits – for anybody!

Take the Occupational Safety and Health Act (OSHA), designed to improve worker safety. As John Leeth, Nathan Hale show in a study for the Mercatus Institute, OSHA has had only a modest impact on worker safety, if any impact at all. (See the graph.) Anti-discrimination laws are another example. In an exhaustive review of the literature, former Congressional Budget Office director June O’Neill and her husband Dave find that laws against gender discrimination are having no effect on the relative wages of men and women. The 1964 Civil Rights Act appeared to have an effect in the South. But today, there is no evidence that regulation is having an effect on the relative wages of blacks and whites. These laws are, of course, contributing to the incomes of lawyers and human resources consultants and adding to the administrative costs of every business. But they are not affecting average wages. 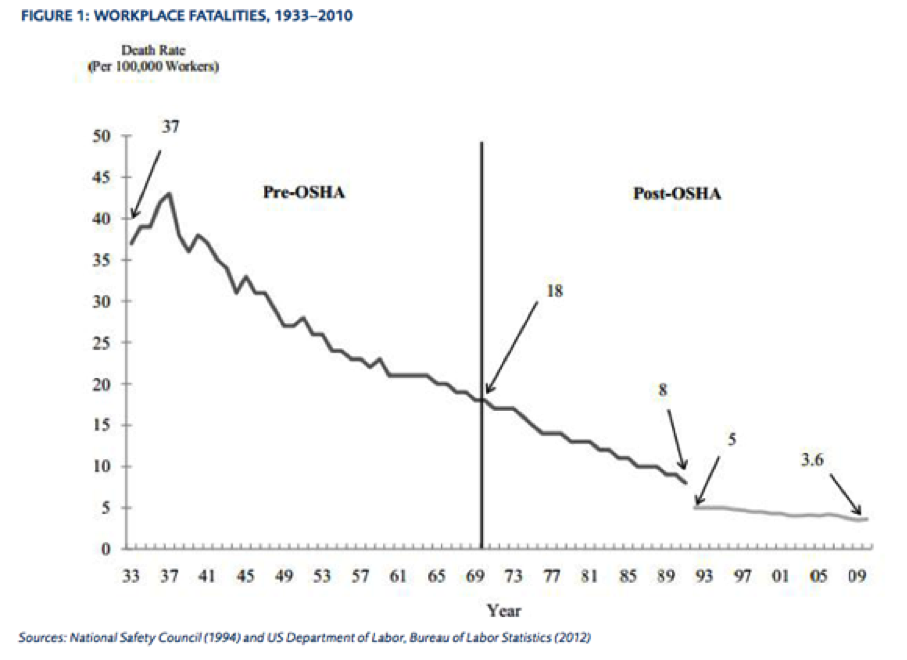 Take occupational licensing. Remarkably, almost one in three jobs in the United States requires a license from government. In virtually every case, the regulations exist not because the public asked for protection, but because the practitioners wanted to exclude new entrants from the market. Even the Obama White House has signaled alarm.

More generally, most regulatory agencies came into existence because of the lobbying power of the regulated industry. At the Goodman Institute website I wrote:

As the leftist historian Gabriel Kolko has documented, the Interstate Commerce Commission (ICC) — our first federal regulatory agency — was dominated by, and served the interest of, the railroads. Similarly, the regulatory apparatus created by the Meat Inspection Act of 1906 served the interests of large meat packers. Safety standards were invariably already being met — or were easily accommodated — by large companies. But the regulations forced many small enterprises out of business and made it difficult for new ones to enter the industry. This same pattern — of regulatory agencies serving the interests of the regulated — was repeated with the establishment of almost all subsequent regulatory agencies….

The practices Kolko described were elevated to a refined science by [Woodrow] Wilson’s War Industries Board (WIB) during World War I. Trade associations were allowed to organize along industry lines — controlling output, setting prices and effectively functioning as an industry-by-industry system of cartels.

Through the NRA, the federal government — backed by the full force of criminal law — intruded into virtually every transaction. An immigrant dry cleaner spent three months in jail for charging 35 cents to press a suit when the code required a minimum charge of 40 cents. Another case —one that went all the way to the Supreme Court — involved immigrant brothers who ran a small poultry business. Among the laws they were accused of violating was a requirement that buyers of chickens not select the chicken they were buying. Instead the buyer needed to reach into the coop and take the first chicken that came to hand. (The reason: buyers would be tempted to take the best chicken, leaving less desirable options for other buyers.)

Economists know a lot about the economic consequences of regulation. But you will learn very little about what they know on the editorial pages of The New York Times.

This article was originally posted at Forbes on September 28, 2015.