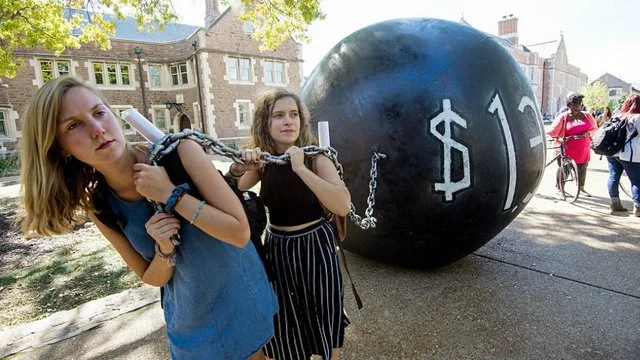 President Biden and members of Congress have offered several proposals to lower Americans’ $1.6 trillion in outstanding student debt. As a group, these proposals could reduce outstanding student loans by one third. The proposed relief includes outright federal student loan forgiveness of at least $10,000 per borrower, the ability to discharge student debt in bankruptcy, the elimination of tuition debt incurred by low- and middle-income workers who attended public institutions, reducing, for low-wage workers, the share of income payable under income-driven student loan programs and annual loan forgiveness for those working in public service jobs. There are also proposals to make community college free, to make public colleges and universities tuition-free for students with low- and middle-income parents and to double federal Pell Grants, which provide grants to students from poor families.

COVID-19 has produced an economic depression for half the country. So, pulling out all stops to provide economic relief to those in need seems like the right prescription. And we certainly have large numbers of young, middle age and even older Americans who are over their heads in student loan obligations. But there are three major concerns with student debt relief. The first is generational affordability. The second is fairness. The third is work and saving incentives. These concerns point to a different student-loan policy direction.

After inflation, Uncle Sam can now borrow at very low rates. Consequently, many people, including many prominent economists, think federal deficits are free. They aren’t. If they were, we could cut taxes to zero, borrow every penny needed and watch interest rates skyrocket. Yes, the Fed would counteract the sale of bonds by printing money to buy them. The result would be hyperinflation. And those who are, today, buying 30-year Treasuries at the current 1.85 percent nominal yield would end up holding bonds worth less, in purchasing power, than the paper on which they are printed.

In short, there is a limit to deficit finance, and we are skirting perilously close to that limit. Last year’s 16 percent of GDP deficit was the largest since World War II. According to the Congressional Budget Office (CBO), debt is now 100 percent of GDP — up from 34 percent a decade ago. The CBO projects a 200 percent debt-to-GDP ratio by 2050. And this only references official debt. Most of Uncle Sam’s I.O.U.s have been carefully kept off the books. These implicit, but no less economically real, debts swamp the ones Congress has deemed to formally disclose. Social Security’s unfunded liability is an example. According to its trustees, the system’s red ink is $53 trillion and growing. That’s well more than two years of GDP.

Add up all of Uncle Sam’s disclosed and undisclosed I.O.U.s, i.e., compute the country’s fiscal gap – the present value difference between projected outlays and receipts – and we’re talking about eight years of GDP. This is the generational bill we are dumping in our children’s and grandchildren’s laps. Piling more debt on top of this burden is unconscionable.

Yes, those who have been financially devastated by COVID-19 need economic rescue. But that needs to come from today’s adults who have sailed through this storm unscathed or, indeed, have prospered financially.

To those who say, “We’re nowhere near the borrowing brink. It we were, rates would be incredibly high,” my answer is, “We’re beyond the brink. The market just doesn’t get it.

And when it does, things will turn on a dime and there will be high rates and high inflation. Or if the market is right – that inflation will not rear its ugly head and that long-term Treasuries are safe real investments – taxes will have to be raised sky high. We simply cannot borrow eight years of GDP and expect real rates to stay fixed and economic growth to eclipse eight years of output.”

Borrowing more thus represents playing Russian economic roulette with our own and our kids’ financial futures. Stated different, there is no free lunch apart from, at long last, intelligently fighting and quickly ending COVID.

Forgiving federal student loans is unfair to those who a) just paid off their loans, b) saved for or worked their way through college or grad school, c) refinanced in the private market and no longer hold federal loans, d) have been working for years in public sector employment in order to win loan forgiveness, or e) have already effectively purchased forgiveness by repaying their loans for years on an income-driven basis.

Several of the proposals condition their generosity on the income level of the student or the student’s parents. Low- and middle-income parents already face major student-aid taxes on earning more money and saving, both of which can substantially lower the college grants and scholarships awarded to their children. And most Americans already face high to very high to incredibly high marginal tax rates on working. Congress needs to understand how any new student-loan largess will impact work and saving disincentives.

A far better, fairer and simpler student-loan reform is available. It lets students as well as their parents borrow at the government’s long-term Treasury bond rate. The current rate is 1.85 percent. College students face a 2.75 percent borrowing rate, graduate and professional students face a 4.30 percent rate, and parents, who borrow to help finance their children’s education, face a 5.30 percent rate. Hence, this proposal, which would permit federal and private loans to be refinanced federally at the prevailing 30-year rate, would substantially lower the cost of borrowing for higher education.

Unlike standard deficit finance used to finance current consumption, this policy involves the government investing in our nation’s human capital. It will also, via refinancing, provide immediate relief to students with substantial debt that they are carrying at high rates. And it would not saddle our progeny with yet another massive bill to pay for “our” largess.

← Joe Biden’s Tax Plan The Case for I Bonds →