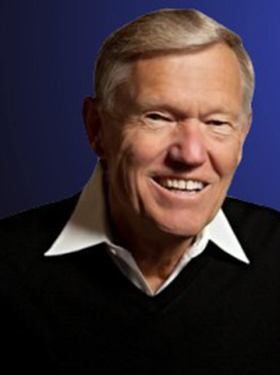 Barry Asmus, who died March 30, 2020, studied at  Montana State University, where he was mentored by economists at PERC, the Property and Environment Research Center. He picked up his appreciation of the free market from them (Richard Stroup was his thesis adviser). While Barry didn’t enter the environmental field, he became an advocate for the free market.

But no one I ever met believed as fervently and passionately as Barry Asmus. He didn’t just believe. He wanted you to believe, too. His speeches on public policy came close to being sermons. If you happened to be a liberal, he did everything he could to save your political soul.

He loved to get in front of an audience and give his listeners an unforgettable experience. He was disappointed if he didn’t get a standing ovation at the end.

He once told me: when you finish a speech, if you aren’t sweating from head to toe you haven’t done your job.

I think it was Paul Samuelson who once said, “I’m very lucky; I get paid for doing something I would have done for free.” I believe the same could be said of Barry. He made a good living as one of the nation’s  most effective public policy speakers. But if he didn’t need the money, I think he would have done it all for free.

I met Barry soon after I created the National Center for Policy Analysis (NCPA), an organization the Heritage Foundation referred to as “the new ideas think tank.” Barry loved new ideas and he especially loved telling audiences about things they had never thought about before.

One idea he really liked was my proposal to reform the welfare system with Taxpayer Choice. Under the proposal you would be able to take the share of your taxes that support public welfare programs and give the money to private charities instead. In this way private charities would compete with public charity and taxpayers could decide what programs work best.

After one of Barry’s speeches, the CEO of American Express liked the idea so much he wrote the NCPA a check for $25,000.

Another idea Barry liked was our proposal for Health Savings Accounts. Today, about 26 million people have one. But back when almost no one had one, Barry was unequaled in his ability to explain why people are better and more careful consumers when the money they spend is their own.

← Gorman: US Hospitals are Safer Five Financial Secrets to Surviving the Greatest Depression →