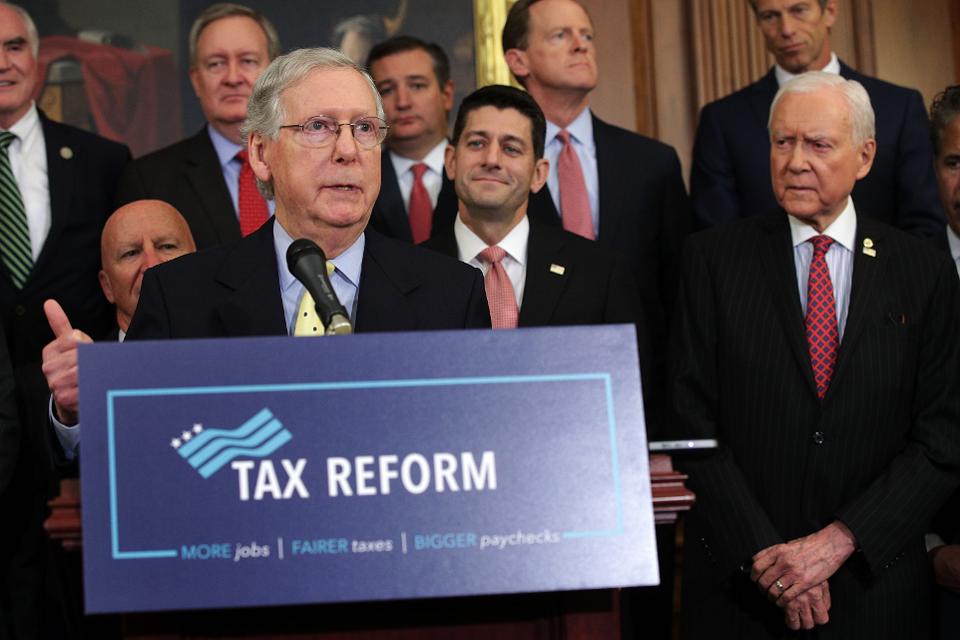 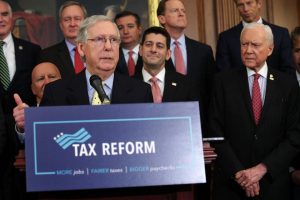 The just-announced Republican tax plan is essentially the House “Better Way” plan proposed in June 2016. The business part of the tax reform transforms our corporate tax into a business cash flow tax (BCFT) by moving to full expensing and restricting interest deductibility. Tax economists, red, blue, and purple, have advocated doing this for years. (Hence, the quotes around Republican. This plan is much more non-partisan than those on the left might think.) The personal tax reforms simplifies personal income taxation. It eliminates some tax breaks for the rich, but also eliminates the Alternative Minimum Tax and the estate tax. In addition, it reduces tax brackets from seven to three, dropping the top rate from 39.6% to 35.0%. Yet it appears open to a 4th very-high-income tax bracket.

Some highly beneficial features, including Boarder Tax Adjustment, included in the first plan, have gone missing. But, on balance, this plan should significantly grow our economy while maintaining the current degree of progressivity. If coupled with the elimination of the Social Security payroll ceiling, it would surely garner significant Democratic support as well as shore up our currently insolvent primary saving system.

The basis for my Support

The 35% statutory U.S. corporate tax rate is one of the world’s highest. But thanks to loopholes and evasion, the average rate (corporate taxes divided by corporate income) is quite low — roughly 14%. Yet what matters for corporate investment is not the official rate. Nor is it what corporations pay on average. What matters is the marginal tax rate (METR). The U.S. METR is extremely high – 34.6% – thanks not just to federal, but also state and local tax provisions. Our high METR, which the House plan would cut by more than half, helps explain why our domestic investment rate is running at roughly 5% of national income. The rate was 15% in 1950.

The personal side of the House tax plan is, on balance, regressive. But the business side is quite progressive. It’s BCFT is mathematically equivalent to a Value Added Tax (VAT) plus a wage subsidy. Since a VAT taxes consumption and since the House plan’s wage subsidy shields worker’s from this consumption tax, what’s left is a tax on consumption purchased out of wealth. Hence, the “Republican” business tax plan imbeds a subtle, but major tax on wealth, which neither Republicans nor Democrats seem to get. Alan Auerbach, an economist at Berkeley, Darryl Koehler of my company and I did a careful study of the Better Way plan’s overall impact on fiscal progressivity. We showed that the plans’ hidden wealth tax largely offsets the personal provisions leaving the system virtually as progressive as the current system.

The only way to understand the impact of the House plan on our economy and its finances is to simulate the reform in a large-scale global model of the economy. My recent co-authored (with Seth Benzell of MIT and Guillermo Lagarda of the Inter-American Development Bank) simulation of the House tax plan suggests it would quickly raise the stock of U.S. capital by roughly 20 percent, GDP by roughly 7%, and real wages by roughly 9 percent. Moreover, the economy’s dynamic expansion generates enough extra revenue to offset static revenue losses.

This is due not to some supply-side alchemy of which the model has none. Indeed, cutting just personal income tax rates in the model reduces GDP, increases government debt, and requires higher future personal tax rates than those now in place. The impressive simulated supply-side response to the House plan is due to its dramatic improvement in incentives to invest in the U.S. and the fact that the supply of global capital is highly elastic.

The model is, by the way, a highly advanced version of the Auerbach-Kotlikoff model, which I developed over four decades back with Alan. Its economics’ standard life-cycle model transformed to incorporate demographic change, fiscal policies, and technological change. Variants of this bread and butter growth model have been used by U.S. government agencies, including the Congressional Budget Office and the Joint Committee on Taxation, as well as by economists around the world. Consequently, its findings can’t be dismissed as partisan.

Many people think the U.S. corporate tax taxes the rich and cutting it will help them. The model strongly disagrees. It says that the corporate tax is actually a hidden tax on workers since it leads companies to move their capital and jobs abroad, thereby lowering U.S. wages. Moving from it to the BCFT is effectively moving from taxing wages to taxing wealth – a Democrat’s tax-reform dream come true. Other people think the corporate METR doesn’t matter because many large companies are sitting on lots of cash. But that cash is being lent to other companies for them to invest. Yet others oppose the House plan because it eliminates business-interest deductibility. This is another red herring. Permitting deductibility of interest induce companies to leverage up, making their operations riskier at a major cost to the Treasury.

The House tax reform is something both Democrats and Republicans can and should support. Democrats should push to include elimination of the FICA ceiling, but even as is, the bill deserves their strong support.

This article was originally published at The Seattle Times on September 27, 2017. (http://bit.ly/2zEEbj2)

← Has Equifax Just Jeopardized Your And 143 Million Other Americans' Social Security Benefits? Kotlikoff to WSJ: Where Critics of Tax Reform Go Wrong →