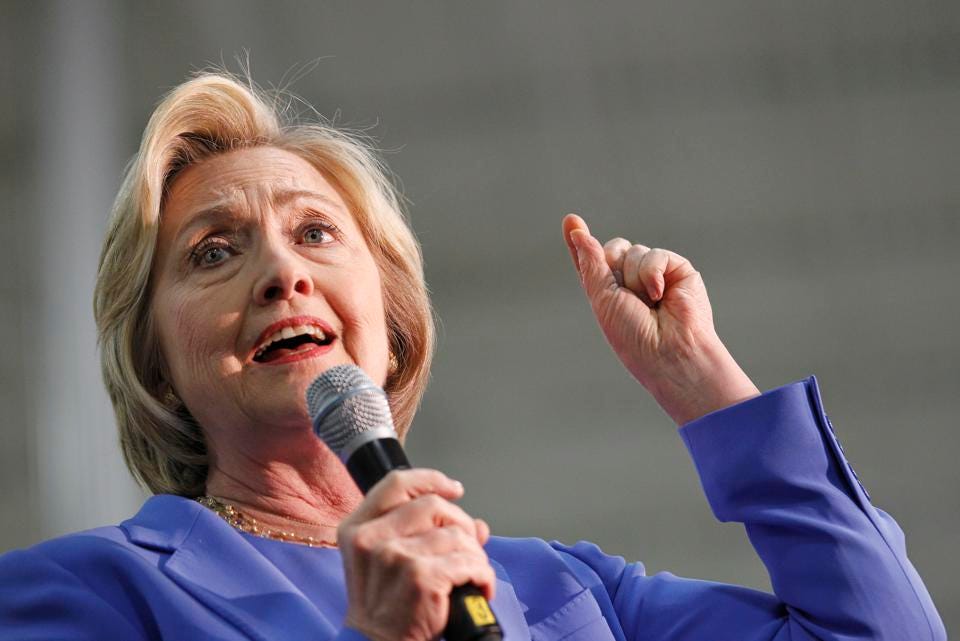 Originally posted at Forbes, May 2016

The more Bernie Sanders continues to pound on Hillary Clinton, the more she moves left. California Sen. Diane Feinstein says Sanders’ continued presence in the Democratic primary race is making it impossible for Hillary to “pivot.” What she means is: it’s going to take longer for Clinton to reverse herself in the general election on all the leftwing ideas she has endorsed in the primary.

But what if she doesn‘t pivot? What if she really means what she has been saying? Here is where she is right now:

Standing by Obamacare. Although she promises to tinker with the Affordable Care Act (see below) Clinton is not proposing to fix any of its largest problems, including these:

Health insurance expert Robert Laszewski notes that UnitedHealth (the largest health insurer in the country) and Humana are backing away from the exchanges and other insurers are hinting they might do the same, given the large losses they are incurring. Yet there are two companies, Molina Healthcare Inc. and Centene Corp that are making a profit. What is their secret? These companies are Medicaid contractors and the product they offer is private sector Medicaid.

Think about that. In the future the only products that survive in the individual market may be Medicaid!

Throwing Good money After Bad. So what does Hillary Clinton propose to do about Obamacare? Spend more money. She proposes (1) to limit out of pocket costs to 5% of family income by offering a tax credit of up to $5,000 for spending above that amount, (2) to limit premium expenses to 8.5% of income, (3) to fix the family glitch, whereby dependents who are offered unaffordable coverage at work are barred from the exchange and (4) to spend more money to enroll people in Medicaid.

None of this will be of much help to middle class families and none of it changes the structural problems of Obamacare.

She also supports a “public option” in the exchanges and that, of course, would be Medicaid. What she apparently doesn’t know (or what left wing voters don’t know) is that two thirds of Medicaid enrollees are in plans (see here, page 13) managed by private insurers!

Opening up Medicare to the Near Elderly. In a concession to Bernie Sanders and the political left, Secretary Clinton is suggesting a Medicare buy-in for “people 55 or 50 and up.” Here is what she appears to not understand.

About one-third of Medicare enrollees are in private Medicare Advantage plans that look very much like the health plans non-seniors get through their employers and most young seniors prefer these plans. They are offered by familiar names: United health, Cigna, Humana, Aetna, etc. Further, these plans cost less than traditional Medicare and the best MA plans are the only place in the country where you can find examples of integrated, coordinated, managed care that actually works.

So, if near seniors enter Medicare Advantage plans they will be enrolling in plans most of them already had access to anyway. To make sure this option doesn’t add to the deficit, the enrollees would have to be charged an actuarially fair price – one that reflects the expected cost of their health insurance. Current estimates place that at a premium of about $7,600 or $15,200 for a couple.

That’s a lot more than they would likely pay today for three reasons. First, health insurance acquired at work is usually purchased with pre-tax dollars (a subsidy that can be worth as much as half the cost of the insurance), whereas there is no tax break for those who pay Medicare premiums. Second, health insurance acquired in the (Obamacare) exchanges often qualifies for generous tax subsidies that are, again, not available to Medicare enrollees. Finally, insurance premiums in the exchanges are artificially constrained – the premium charged to older enrollees cannot exceed the premium charged to younger ones by a factor of three, while the real cost difference is six or more. So, even without a tax subsidy, seniors in the exchanges are paying premiums that are about one-half what they should be.

Regulating the Drug Companies. Among other things, Clinton wants Medicare to bargain over prices with the drug companies. Will that work? As Donald Trump likes to say, bargaining never works unless you are willing to walk away from the table. The Veteran’s Administration actually does this. There are drugs the rest of us have access to that veterans don’t, and that’s why the VA’s drug bill is lower than comparable private sector costs and even Medicare’s costs.

When the Congressional Budget Office looked at this question, they concluded that unless Medicare is willing to take some drugs off the coverage list (including lifesaving drugs) or charges patients a greater payment for some drug rather than others for the same condition, Medicare is likely to do no better at negotiating than private insurers do.  (See this USA Today article.)

Meanwhile, there are reasons to keep government at bay when it comes to pharmaceuticals. As former Senators Bill Frist and Tom Coburn wrote in the Wall Street Journal the other day, “researchers and developers spend as much as $2 billion to bring a new drug or therapy to market and the regulatory process can take more than 10 years.”

No one is going to spend $2 billion on a new drug if there is a reasonable chance that in 10 years they will get no better than the rate of return on government bonds.

This article was originally posted at Forbes on May 16, 2016.

← Eight Health Reforms the GOP Should Avoid Do Republicans Have a Death Wish on Health Care? →