Are High Deductibles a Good Thing? Part I 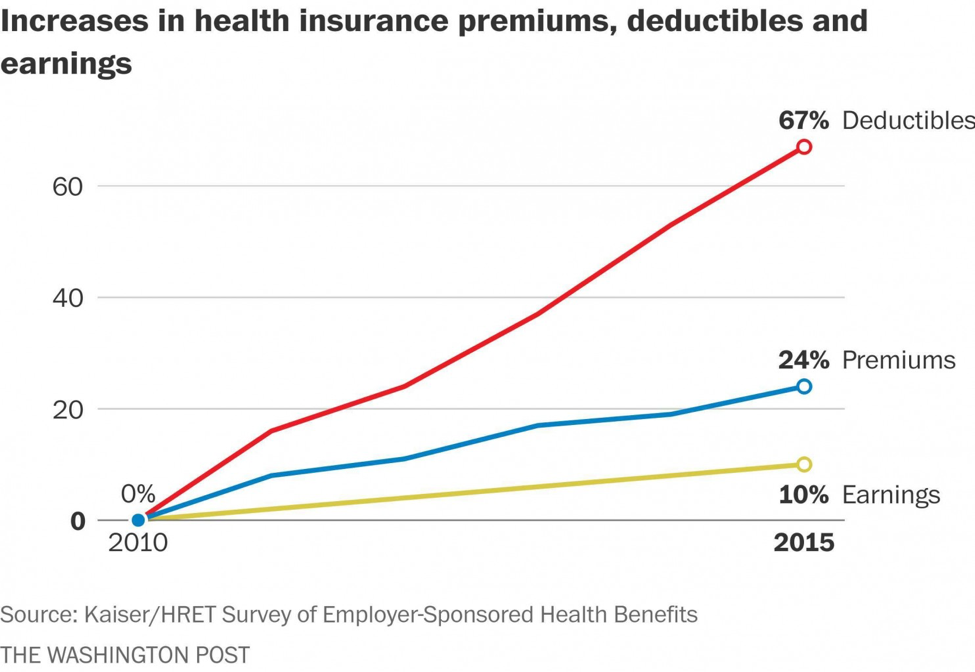 Because I am often called the “Father of Health Savings Accounts” people sometimes assume that I favor high deductible health insurance. I don’t. In fact, I don’t really favor deductibles at all. Deductibles, along with co-insurance payments, are very crude devices that give patients very imperfect incentives.

What I favor instead is self-insurance for many kinds of medical expenses, including almost all primary care and most diagnostic tests. Where third party insurance is involved I favor fixed payments — wherever practical – with the patient self-insuring for any additional expense. (See, for example, Anthem’s experiment with knee and hip replacements in California.)

In other words, I favor giving people the ability to purchase the health care they need, but allowing them to make marginal decisions between health services and others uses of money – undistorted by taxes, third-party reimbursement or any other artificial intrusion.

There was a time when cost sharing requirements were thought to be a step in the right direction by many health economists. But in today’s environment, deductibles and copayments are being misused by insurance companies and employers who are perversely trying to attract the healthy and avoid the sick. They are doing so precisely because of public polices forced upon them by politicians who thought they were actually helping people with medical problems.

Take a look at the chart below. It shows that in the years since the passage of the Affordable Care Act (Obamacare), the average deductible in our health care system has risen seven times faster than take-home pay. What the chart doesn’t show is an even worse reality. The deductibles in many health plans don’t even apply to a great deal of primary care. Instead they apply to chronic care and expensive hospital procedures. Extra out-of-pocket charges are often faced by cancer patients, AIDS victims and others who need expensive, lifesaving “specialty drugs.” And of the Silver plan PPO products (allowing some paid out-of-network care) offered in 2015, only about one-third remained unchanged in 2016, while the rest either reduced patient options or eliminated them altogether.

It’s hard to escape the conclusion that health insurance plans today are specifically designed in order to shift costs to the sick, effectively denying them care when they cannot afford the huge cost sharing required of them.

All of this is the result of perverse incentives created by unwise public policies.

Since insurance companies are not allowed to deny coverage or charge a higher premium to people based on health status, it inevitably follows that they will try to attract the healthy (on whom they will make a profit) and avoid the sick (on whom they will incur losses).

Forget the very idea of deductibles and copayments for a moment and imagine you were an insurer and you could design a health plan of your own – keeping in mind that in order to be profitable you want lots of healthy enrollees, not sick ones. One obvious strategy is to keep the premium as low as possible – since the conventional wisdom is that the healthy buy on price, often ignoring other features of the plan. You can do that in part by making the sick pay out-of-pocket for a large share of their costs and by paying fees to providers that are so low that all the best (most expensive) providers turn you down.

Beyond that, you want to offer for free (or almost free) the services that healthy people use – wellness checkups, diagnostic tests, etc. There aren’t very many of these because healthy people don’t use much health care. On the other hand, you want to charge as much as possible to patients who use expensive health services, such as hospital admissions and expensive drugs.

This isn’t rocket science. Almost any of us could do it without very much thought.

It is also what I call “the race to the bottom,” a process in which care for the sick gets worse and worse through time, as every insurer strives to avoid them – like a game of musical chairs.

And although the worse consequences of the race to the bottom are evident in the health insurances exchanges, there are also signs of similar trends at the place of work. That’s because employers today are not just wage payers, they are also insurers. Like commercial insurers, they cannot deny admission to their health plans or charge higher premiums because of health status.

One irony in all of this is the politics of high deductibles. Back in the days when deductibles served some kind of rational purpose, folks on the left often criticized them for forcing people to choose between health care and other uses of money. Today, when they are serving perverse purposes, the Obama White House is defending them, with the defense varying from the argument that high deductibles encourage patients to hold down their medical costs to the argument that “it could have been worse.”

Fortunately there is a better way. We can design a system in which individual self-insurance through Health Savings Accounts combines with third party insurance in a way that virtual eliminates deductibles and coinsurance altogether. 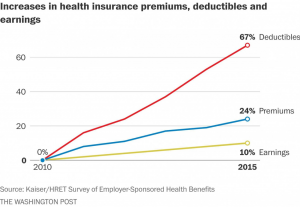 This article was originally published at Forbes on March 7, 2016.

← Better Care at One Tenth the Cost Are High Deductibles a Good Thing? Part II →