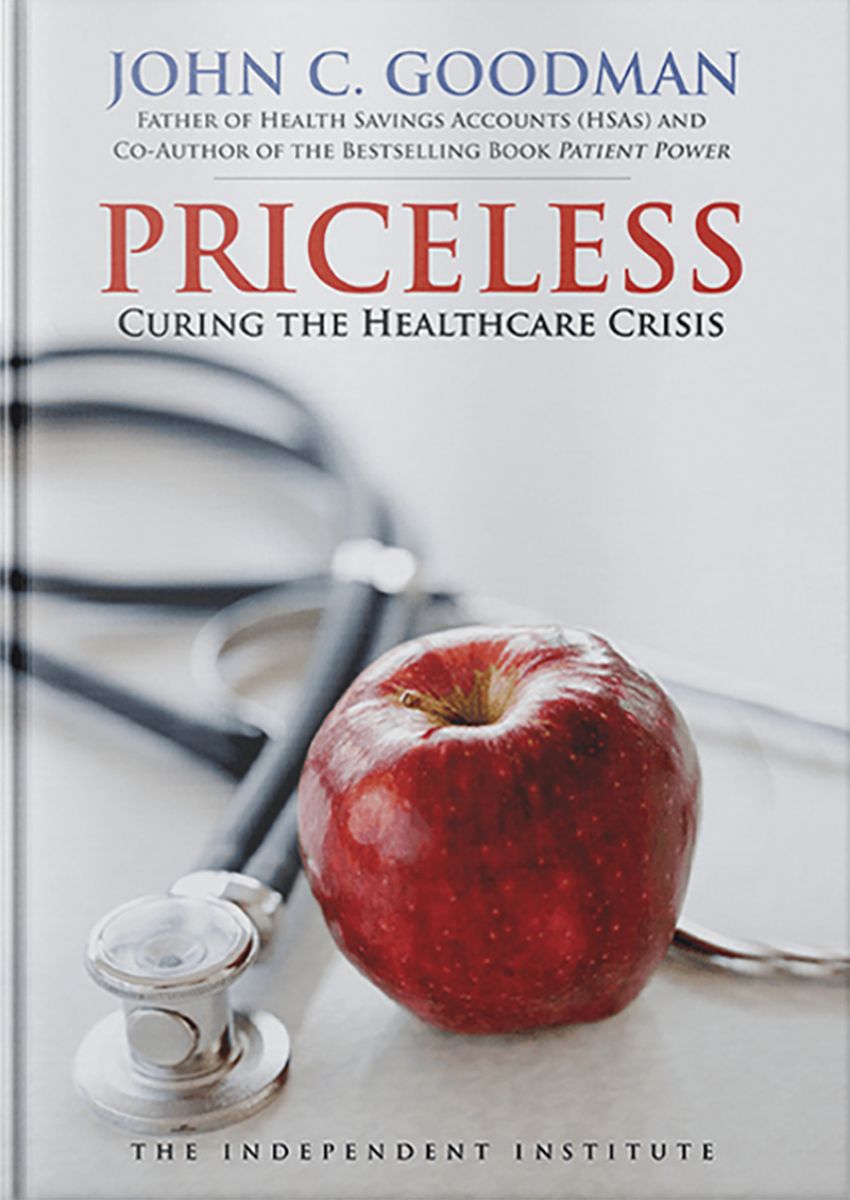 Our health care system is a complex system. As I explained in Priceless, there is no known, reliable model of how it works. Whatever policy changes we make, there are certain to be unintended consequences and they may make matters worse than when we started. So how should we approach health policy?

In an article in the Journal of Legal Medicine, I argued that before we try to solve social problems in health care we should first make sure that government is not the cause of the very problems we are trying to solve. How do we do that? By identifying the major ways in which government policies create harmful, perverse incentives and then replacing them with neutral (do no harm) policies. Once we have removed the perverse incentives government has created, we will be in a position to see if there are any remaining problems that need to be solved.

What are the harmful policies that need to be neutralized? They are policies that affect ten key choices that must be made by everyone:

How much should we spend on health care as opposed to other things we value in life? For the most part we should leave that decision up to the consumer/patients who get the benefits of the consumption decisions they make.

Is there a way of giving people the same tax relief they get today (and continuing to encourage insurance against large medical expenses) without creating this bias? Yes. A fixed sum tax credit that offsets dollar for dollar the cost of the core insurance we want everyone to have would leave people free to purchase additional insurance with unsubsidized (after-tax) dollars. At the margin health care and non-health care would trade against each other on a level playing field.

The John McCain health plan met this requirement, as did the Coburn/Ryan bill. Many of the current Republican proposals are watered down and very imperfect versions of this approach.

Obamacare in particular penalizes people who work more and earn more. The implicit marginal tax rate created by the phase out of Obamacare subsidies is about 6 percentage points. At several cliff points, families can lose $10,000 or more in subsidies by earning an additional dollar of income. These perverse incentives are expected to reduce the labor force by the equivalent of 2.5 million fewer workers. (CBO) Over all, ObamaCare’s anti work provisions will create a long term loss to the economy on the order of 5% of GDP – or more than $800 billion a year at current prices (Mankiw/Mulligan).

The answer, again, is a fixed sum, tax credit that is the same – regardless of whether people work or don’t work and regardless of how much they earn. Such a tax credit needs to be refundable. People would get it even if they have no taxable income.

If people don’t insure, they run the risk of incurring medical bills they cannot afford. In our society, we don’t deny people needed care just because they can’t pay, however. In fact, uninsured patients on the average pay only about 20% of the cost of the care they receive. The remainder is paid by someone else. The result is an implicit insurance policy. The uninsured are not really uninsured; they have implicit insurance with a 20% co-insurance rate. And because the implicit plan is free and privately purchased insurance is costly, people are encouraged to be uninsured.

What’s the answer? The flip side of a tax subsidy is a tax penalty. If people are offered a $1,000 tax credit if they insure and they decide not to insure they will pay $1,000 more in taxes. You can think of that as the implicit penalty for being uninsured. What should be the size of the tax credit? Under a neutral approach the size of the tax credit would be equal to the value of free care people expect to receive if they remain uninsured.

The answer? Set the tax credit for private insurance at an amount equal to the cost of enrolling people in Medicaid.

[And because it may be impossible to both satisfy this condition and the condition in the previous section, ideal neutrality may not be exactly achievable. But we can move in that direction.]

How much of our healthcare dollars should we turn over to third-party payers (insurance companies, employers or government) and how much should we manage on our own? Ideally, this decision should be based on individual choice and competition in the marketplace. Right now, more than 30 million people are making those choices by means respect to Health Savings Accounts (HSAs) and Health Reimbursement Arrangements (HRAs). However, the regulations are much too restrictive and they discriminate against the chronically ill.

Under the current system, as noted, employers and employees can pay health insurance premiums with untaxed dollars. Individuals buying insurance on their own get no such tax advantage, however. Individuals who do not qualify for subsidies in the exchange (earn more than $45,000, for example) get no tax break at all unless they are self-employed or unless their expenses exceed 10% of income. Within the exchange, below-average income families get much more generous subsides than they would if they acquired insurance at work and above-average income families get much less.

What we have is a hodgepodge of tax breaks that are inconsistent, arbitrary, unfair, on the whole regressive and which carry with them all kinds of perverse incentives to make socially undesirable choices.

The answer is to treat everyone the same. The tax subsidy for private health insurance should be the same regardless of where insurance is obtained – at work, in the marketplace or in an exchange.

Community rating (same premium for everyone) and guaranteed issue (accept all applicants) regulations distort choices for everyone. They insure that everyone is facing the wrong price. In general, people who are under-charged will over-insure and people who are over-charged will under-insure. On the seller side, health plans have a perverse incentive to attract the healthy and avoid the sick. After enrollment, the plans will have a perverse incentive to over-provide to the healthy (to keep the ones they have and attract more of them) and under-provide to the sick (to encourage the exodus of the ones they have and discourage enrollment by any more of them).

How can we create good incentives in the market for risk avoidance and at the same time satisfy the public’s desire to avoid discrimination against pre-existing conditions? First, give people a one-time opportunity to enroll at community rated premiums (as we now do in Medicare Part B and D and in the Medigap program). Anyone who doesn’t enroll at the first opportunity, however, would face penalties at the point of any future attempt to enroll. The ideal penalty is “medical underwriting” and charging a premium that reflects true actuarial costs. Second, if people subsequently decide to upgrade (moving, say, from a Silver plan to a Gold plan) they would be charged the full actuarial cost of the move. If anyone decides to down grade (moving, say for a Silver plan to a Bronze), they would get a rebate equal to the full actuarial value of the move.

Finally, when an enrollee switches from Plan A to Plan B, she will pay the same community rated premium that other Plan B enrollees pay at the same metallic level. But if she is an above average cost patient, Plan A will have to compensate Plan B for the extra expected costs. If she is below average, Plan B will compensate Plan A. the mechanism is called “Health Status Risk Adjustment” and I have written about it elsewhere.

Where should we go to get health care? If a hospital, which hospital? If a doctor, which doctor? Ideally, our choices should be guided by individual preference and by competition among providers based on price, quality and access to care. However, Medicaid and Medicare are still basing their payment rates on outmoded cost formulas that are decades old. As a result, the government is paying some hospitals two or three times more than other hospitals for the same services! And because government is such a large payer, private third-parties tend to pay the same way. We pay the costs of such wasteful buying through our taxes, higher premiums and reduced wages.

Under neutral policy, government would pay the same fee for the same quality of service regardless of which entity provides it.

Should health care be delivered in a hospital? Or a doctor’s office? Or at a walk-in clinic? Currently, hospitals can charge Medicare more – sometimes two or three times more — for the same services than doctors can charge if they bill Medicare as independent practitioners. This is one reason why more than half the doctors are now working for hospitals and other institutions, rather than working in private practice. And (what should surprise no one) hospitals are using their new doctor employees to get more money out of Medicare.

After adjusting for differences in safety and quality, a neutral government policy would pay the same fee for the same service – regardless of where it is delivered.

As I wrote at Health Affairs the other day, it is quite surprising to realize how many innovations designed to lower cost, raise quality and increase access to care are not paid for by third party payers. For example:

A neutral government policy would be open to new ways of delivering services that save taxpayers money, improve quality and increase access to care for patients. Let traditional medicine compete against modern medicine on a level playing field.

This article was originally posted on Forbes on October 29, 2015.

← Race To The Bottom: Competition In The Exchanges ObamaCare Premium Hikes Much Higher Than We’ve Been Told →