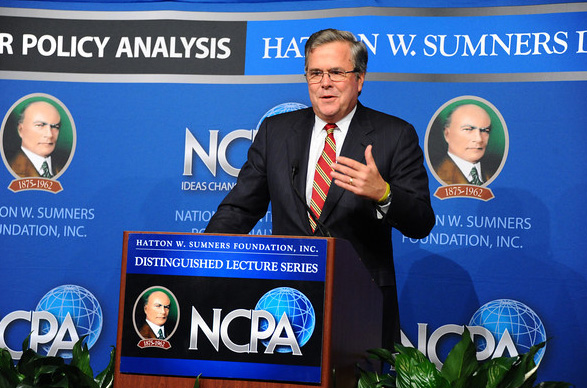 In contrast to Obamacare, the Bush health plan envisions a much smaller role for government and a much bigger role for individual choice and competition in the marketplace. Bush health care differs from Obama health care in five significant ways:

Without the employer mandate, all of the anti-job provisions in Obamacare would be gone. Right now employers have perverse incentives to keep the number of employees small, to reduce their hours of work and to use independent contractors and temp labor instead of full time employees. Under the Bush plan, no employer would be punished for creating jobs.

Without the individual mandate, families would be free to buy insurance that meets individual and family needs rather than the needs of politicians. What woman would willingly choose to buy health insurance that offers free mammograms while she is healthy but makes her pay full price if there is a symptom of something wrong? That’s only one of the many needlessly wasteful and expensive consequences of letting health insurance benefits be determined by the political system.

Also, without the individual mandate there is no reason for anybody to remain uninsured. The Bush tax credit is equal to the average tax subsidy received by employees who get their heath insurance at work. Let’s say a family, for whatever reason, had no additional disposable income. It would still be able to buy a health plan with its tax credit. Lower income families could qualify for additional help. I suspect they would always be able to buy Medicaid-like insurance with no additional cash outlay.

But don’t we need mandates in order to keep people from gaming the system? We have found better ways in Medicare Part B, Medicare Part D and with Medigap insurance. In those markets, if you don’t buy when you are eligible, you can face penalties. In most places, if you don’t sign up for Medigap insurance when you are first eligible, you can be individually underwritten.

The uniform tax credit is also a huge improvement. Because Obamacare conditions its subsidies on income, it raises the marginal tax rate for middle income families by six percentage points and in some cases far more. At 400 percent of poverty, a family can lose more than $10,000 in subsidies if it earns one additional dollar. At other “cliff” points, families can be subjected to thousands of dollars of additional exposure (higher deductibles and copayments) as a result of earning one more dollar. All these perversions vanish if everyone gets the same subsidy regardless of income.

Also, if the subsidy doesn’t vary by income, all kinds of technical problems with healthcare.gov would vanish in a heartbeat. Virtually all the technical problems in the exchanges stem from the need to verify income. That means that the computers run by the exchanges have to interface with the computers of the IRS and other government agencies. Yet, in the main government, computer systems don’t know how to talk to each other and that’s a problem that may never be solved.

If every one of the same age gets the same subsidy, the exchange doesn’t have to check with the IRS to verify income. Next April 15th, there won’t be a plethora of additional taxes and refunds because almost everyone wrongly predicted his income for the previous year. According to H&R Block, as many as 3.4 million people got reduced refunds this year because they underestimated their income when they enrolled in ObamaCare insurance plans.

The portability provision is another huge improvement over the current system. Right now if employers give employees pre-tax dollars to buy their own insurance in the individual market, the Obama administration is threatening to fine them $100 per employee per day. If you think that’s overkill, it tells you just how much the current administration dislikes employees buying and owning their own insurance. With the Bush plan, all the anti-portability provisions in current law will be gone.

Numerous studies have verified that chronic patients with a modest amount of trading can manage their own health as well or better that traditional doctor care. But if they are going to manage their own care they need to also be free to manage the dollars that pay for that care. By allowing larger and more flexible HSAs, the Bush plan opens the door to what could be a major transformation in the treatment of chronic illness.

I have written before about the alarming race to the bottom inside the health insurance exchanges – as health plans opt for ever narrower networks in order to lower premiums and attract the healthy and avoid the sick. The Bush plan doesn’t say how this problem should be solved but it gives state governments the freedom to find their own solutions. As loyal readers know, I believe the ideal solution is “health status insurance” risk adjustment. I have described it elsewhere.

Now for some quibbles. The Bush team doesn’t say how they would pay for this plan. So let me nominate a candidate: use the Obamacare revenues. President Obama and the Democrats did something that Republicans are not very good at any way. They called in all the special interests and got them to agree to tax increases and fee reductions in order to pay for Obamacare. This included AARP. The AMA, the insurance companies, the hospitals, labor unions, big business, etc.

Finally, loyal readers know that I am not fond of a system that gives the employer sector tax subsidies different from those in the individual market. Whenever you do that, people will change their behavior and try to take maximum advantage of the two systems.

My advice is to make the Bush tax credit truly universal – treat everyone the same, regardless of where they obtain their insurance – at work, in the exchange or in the marketplace.

This article was originally posted at Forbes on October 13, 2015.