It’s a “moral outrage,” Barack Obama told the United Nations delegates last week. He was speaking about the fact that 800 million men, women and children in the world scrape by on less than $1.25 a day and that billions of people are at risk of dying from preventable diseases.

So what moral failing is it that we should be outraged about? The president wasn’t clear. So let me make a nomination. I think believe we should be outraged when presidents, educators, newspaper columnists and others who would presume to tell us what to think lecture us about global poverty without bothering to learn the most basic facts economists have discovered on that subject.

Take a look at the chart below. It reflects the economics profession’s best estimate of how human beings lived – going back for one million years. As the chart shows, for almost all of human history, the average human being lived on the economic equivalent of a dollar a day. At times and places, a few lucky souls may have reached two dollars a day. And if they were really, really fortunate, they might have enjoyed a living standard equivalent to three dollars. But that’s it.

For all of human history, prior to the last 200 years or so, our ancestors lived at the subsistence level. For eons, they barely eked out enough to stay alive. 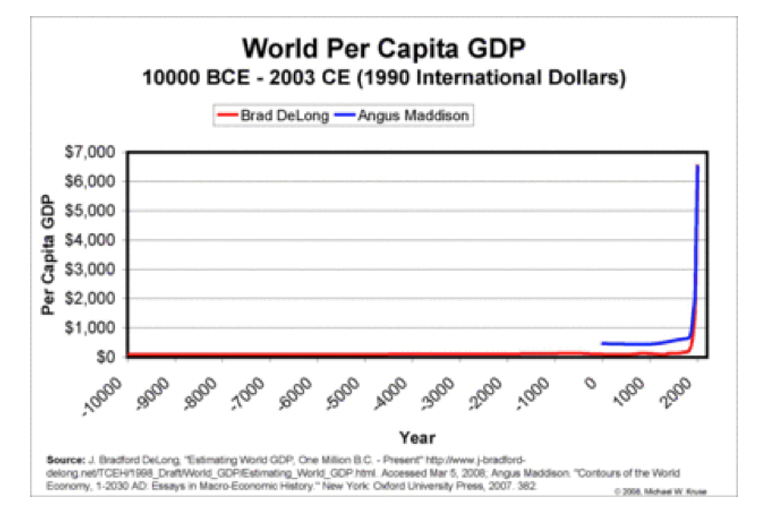 So what changed? In a nutshell, capitalism and the institutions that support and sustain it.

Almost 240 years ago Adam Smith wrote his classic book, An Inquiry Into the Nature and Causes of the Wealth of Nations. It was the fountainhead of the science of economics and it focused on the very question President Obama was addressing. Yet it differed in one respect. Instead of asking, why is there poverty? Smith asked, why is there wealth?

In Smith’s day, no nation was really wealthy by our standards. But some countries were relatively wealthier than others. Smith wanted to know why. His inquiry led to subsequent inquires and today economists know a great deal about why some nations are rich and others are poor.

But first, back to the president. Why does Barrack Obama think that there are nations in the world that are so poor their citizens live no better than their ancestors lived one million years ago? Apparently, the president thinks the reasons are: corruption, inequality, sexism, war and climate change. As Gardiner Harris reports in The New York Times:

“One of the best indicators of whether a country will succeed is how it treats its women,” Mr. Obama said, then continued, “And I have to say I do not have patience for the excuse of, ‘Well, we have our own ways of doing things.’ ”

Hmmm. I’m all for treating women well, but the last time I flipped through the Wealth of Nations, I don’t remember seeing a chapter on women. Or one on inequality. Or sexism. Or climate change. Has president Obama discovered something that escaped the notice of economists everywhere? Not likely.

As I wrote previously, we can think of an economy as reflecting three fundamental features: capital, labor and what I will call the “efficiency factor.” A country’s stock of capital consists machinery, buildings, land, etc. Labor consists of the country’s human resources that are used in production. The efficiency factor determines how well the country turns capital and labor into output.

Now let’s jump to the bottom line: which of these three factors is most responsible for differences in GDP per person in countries around the world? The answer: it’s the efficiency factor, which you can loosely think of as the presence or absence of bad government and bad institutions.

A paper by Stanford University economist Charles Jones surveys the most recent economics literature and reports that across 128 countries:

a systematic pattern is obvious. In the poorest countries of the world, well over 80 percent of the difference in GDP per worker relative to the United States is due to [efficiency] differences.

Jones goes on to say:

One of the great insights of the growth literature in the last 15 years is that misallocation at the micro level can show up as a reduction in total factor productivity at a more aggregated level…. When resources are misallocated … a given quantity of inputs will produce less output…. [T]his is our best candidate answer to the question of why are some countries so much richer than others.

Now here is the good news. In the last quarter of the 20th century, countries around the world turned away from collectivism and began to liberalize their economic systems. Country after country turned to privatization, deregulation, liberalized international trade and freer markets. The results have been stunning. As the chart below shows, ­­80 percent of the world’s worst poverty (people living on the income equivalent of less than a dollar a day) was eradicated in the past 40 years. Nothing like that has ever happened before. American Enterprise Institute President Arthur Brooks asks:

So what did that? What accounts for that? United Nations? US foreign aid? The International Monetary Fund? Central planning? No.

It was globalization, free trade, the boom in international entrepreneurship. In short, it was the free enterprise system, American style, which is our gift to the world.

I will state, assert and defend the statement that if you love the poor, if you are a good Samaritan, you must stand for the free enterprise system, and you must defend it, not just for ourselves but for people around the world. It is the best anti-poverty measure ever invented. 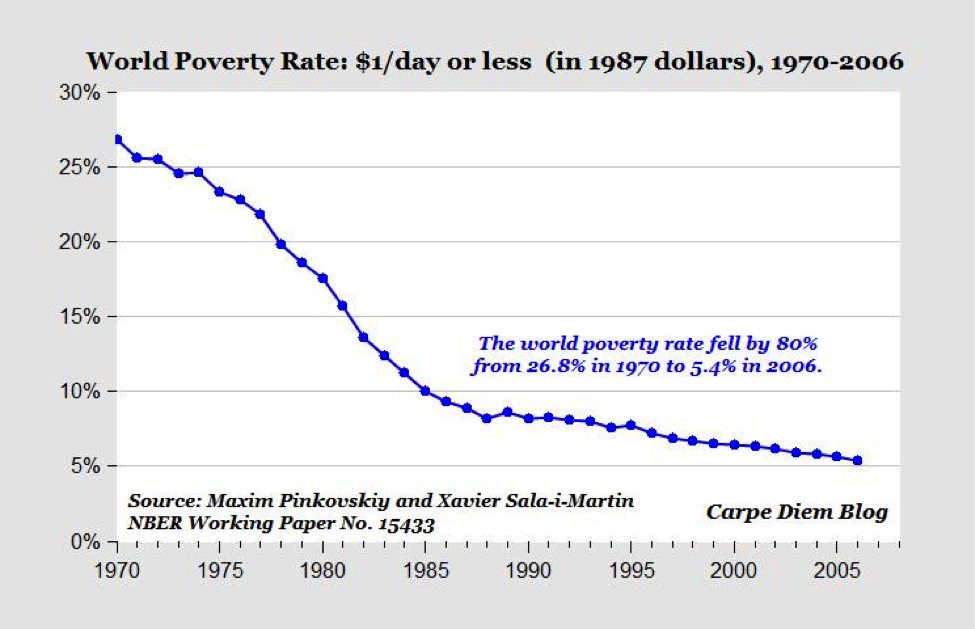 So back to the UN for a moment. To solve the problem of world poverty, president Obama is proposing a 15 year agenda costing the developed countries trillions of dollars.

I’ve got a better idea. Let’s give all the UN delegates a copy of the Wealth of Nations and Professor Jones’ study, bringing Adam Smith’s insights up to the present day.

This article was originally posted at Forbes on October 5, 2015.