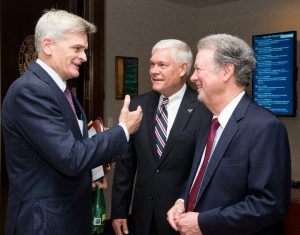 During the third quarter, the Goodman Institute went into overdrive to clear the air of fake news on health reform and geared up for a similar battle on tax reform. Goodman Institute president John Goodman and board member Nan Hayworth were especially visible on cable television, defending the Graham/Cassidy/Heller/Johnson Obamacare replacement bill from all manner of unfair attacks.

We were opposed by virtually every special interest group – each seeking a slice of a $3 trillion industry – and we got very little help from traditional conservative organizations. Even with all that, the measure fell only a few votes short.

Many of the ideas in Graham/Cassidy were also in Sessions/Cassidy, the reform plan that emerged from the Goodman Institute and is summarized at our web site.

“What would happen to my son?” asked the comedian in night after night of unfair monologues, attacking the Republican approach. Our answer:  Under the current system, there are almost 30 million uninsured with no guaranteed access to any facility. 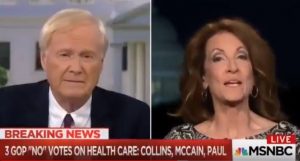 Goodman Institute board member Nan Hayworth argues for the need for a health reform bill on Hardball with Chris Matthews.

Then there is the race to the bottom for those who get insurance in the exchanges. Mayo Clinic, MD Anderson, Sloane Kettering and UT Southwestern (Dallas) are just a few of the premier medical facilities that will not take Obamacare insurance. If Jimmy Kimmel’s son were insured in any of the exchanges, he couldn’t have access to many of the best hospitals and facilities.

Critics went non-stop in an effort to convince every chronic patient in America they would be at grave risk under the Republican reform.

Here is the answer: If you have been paying premiums to any qualified plan and switch to a similar plan in the individual market, you could not be discriminated against. Period.

A glaring omission from the case for replacement was an explanation of what people could expect to gain. In a post at Forbes, John Goodman filled that gap with an array of benefits every state could expect. 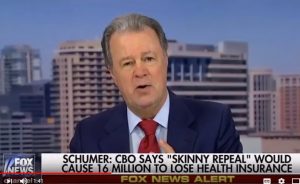 Currently, low- and moderate-income families are being forced to buy coverage that is completely inappropriate for their financial circumstances and health status. Instead of insurance that has unlimited annual and lifetime limits and a $13,000 deductible, would they rather have less upper bound coverage along with a low deductible and a Health Savings Account? The latter option would give the family easy entry into the system, but would leave some very expensive cases for a safety net (which is a more appropriate way of funding them).

One of the worst features of Obamacare is the extremely inequitable treatment of people who are offered insurance at work versus people who purchase their own coverage. Employers of low-wage workers are offering Bronze plans with very high deductibles in return for a premium that is 9.5% of their wage. If employees turn down this offer (which almost all do), neither the employees nor their dependents are eligible for highly-subsidized insurance in the exchanges. Under this reform, the employer and individual mandates would go away and states could equalize the subsidy offered in the group and individual markets. This would be especially important in states where the non-group market has become completely dysfunctional and group insurance is cheaper and better.

Testimony: Managed Competition Is Our Problem

While other witnesses before Senator Alexander’s HELP committee advocated various types of managed competition, John Goodman said that’s the cause of our problems, not the solution.

Managed competition is a system in which health plans are required to charge a community-rated premium to all enrollees regardless of health status, and accept all comers. Buyers can switch among competing plans, usually once a year. It was the core idea behind Hillary Care, Romney Care and Obamacare.

What Reporters Are Getting Wrong About Tax Reform 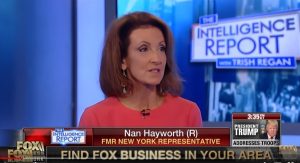 Much of the work of the Goodman Institute consists of teaching writers who should know better some basic economics.  You have probably seen these statements in dozens of news stories and editorials over the past several months.

Myth: Repatriation of foreign capital doesn’t work. In 2005, we had a “tax holiday,” allowing US companies to bring home foreign earnings without paying normal corporate profits tax rates. Did that work? Of course it worked. $299 billion flowed back into the country – roughly five times the average inflow of the previous five years. 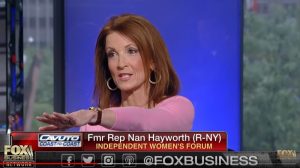 Myth: Buying back company stock is an alternative to real investment.  A common complaint is that companies that repatriated foreign capital did not make new investments or hire new workers. Instead they bought securities, bought back their own stock and/or paid higher salaries and bonuses to management. Answer: money doesn’t vanish when you take it out of one pocket and put it in another. Job opportunities don’t vanish either. In a well-functioning capital market, investment funds will tend to go to the entities who have the best prospects for job creation – and these are often not the original owners of repatriated capital.

Myth: Cutting Corporate Tax Rates Benefits the Rich.  The model also provides the most convincing evidence to date that the burden of corporate income taxation is born by labor, not capital. As a result, a cash flow tax with a labor carve out, such as proposed by the House Republicans, is actually quite progressive. 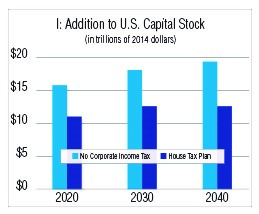 Impact on Capital. The latest modeling finds that the change in the structure of the corporate income tax would have an immediate effect on capital flows. In the near term the US capital stock would increase by almost 20%, or $11 trillion. These results are shown in Figure I, which also shows the impact of eliminating the corporate income tax completely. In the latter case, the US capital stock would increase by roughly 25% in the short run and by almost $20 trillion by the year 2040. 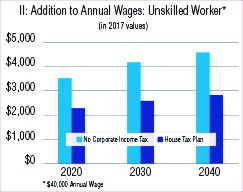 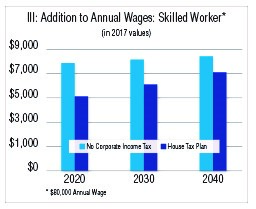 Impact on Inequality. In rejecting the idea that the tax plan is a tax cut for the rich at the expense of the middle class, the economists compared the effects of the plan on lifetime consumption for people in their forties. The share realized by the bottom fifth of the income distribution barely moves – falling from 6.3% percent of the total for the group to 6.1%. At the other end of the spectrum, the share realized by the top 1% also barely moves – rising from 11.5% to 11.6%. The reformed distribution in between these two extremes looks pretty much as it does today.

Gorman: Obamacare is Sucking Vast Sums of Money from the Private Sector

Writing in The Hill, Senior Fellow Linda Gorman notes that Americans had plenty of “stable” health coverage before ObamaCare. From 1987 to 2012 the percentage of people with coverage fluctuated between 83.7 and 87.1 percent. Twenty to 30 percent of the uninsured were not U.S. citizens. Many of them had coverage in their home country. Roughly 30 percent of the uninsured were eligible for Medicaid but did not sign up because they didn’t think they needed medical care.

Saving: Are the Republicans Being Too Stingy with Medicaid? 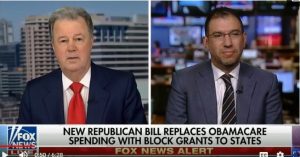 Former Medicare Trustee Thomas Saving says one way to think about the Democratic Medicare cap and Republican Medicaid cap is to see them as similar to the “global budgets” other countries have created for health care spending. The rationale is the same, regardless of country. Health spending can only continue rising faster than GDP growth if all other things we consume rise more slowly than GDP. Otherwise, health care will ultimately crowd out everything else we care about.

Yet Saving and co-author John Goodman say the Republicans have made a tactical error in all this. Clearly there is pressure for them to increase spending for Medicaid. Where they are likely to end up is where they should have been in the first place: matching the Democrats’ cap for Medicare in the Affordable Care Act.