This quarter was dominated by health policy. Obamacare turned age ten. The coronavirus attacked. The goal of the Goodman Institute was to identify and promote core reforms backed by think tanks, advocacy groups, members of Congress and the Trump administration – to give those reforms clarity, voice, intellectual support and leadership.

In a post at Forbes, John Goodman writes: Many lost the insurance they were promised they could keep. Many lost access to the doctor they were promised they could continue to see. Premiums have doubled. Deductibles have tripled. Provider networks are so narrow, people with serious health problems are routinely denied access to the best doctors and the best hospitals.

What about the people who came out ahead? Researchers in Oregon discovered that for the newly insured under Medicaid, there was no improvement in physical health. And their reliance on emergency room doctors actually increased!

Even more astounding, Medicaid enrollees valued their newly acquired coverage for as little as 20 cents and no more than 40 cents on the dollar. About one-third of people who qualified for enrollment didn’t bother to sign up.

That means if we gave these folks the cash equivalent of the cost of Medicaid, they would never buy Medicaid with the money.

Critics of President Trump’s response to the coronavirus crisis characterize it as knee-jerk, spur-of-the-moment, and grasping at any straw within reach. Yet another Goodman post says that many of Trump’s executive actions reflect a new approach to health policy that has been underway almost since the day Donald Trump was sworn into office.

These include the ability to be diagnosed and treated without ever leaving your own home; the ability to talk to doctors 24/7 by means of phone, email and Skype; and the ability of the chronically ill to have access to free diagnoses and treatments without losing their access to Health Savings Accounts.

Has Obamacare Helped People with Pre-existing Conditions? In Many Cases, No 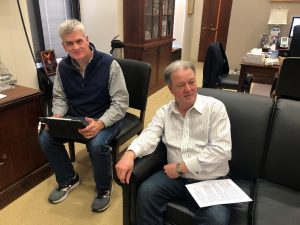 Despite the drumbeat of fearmongering on this issue from the left, many people who immigrate from the group to the individual market (say, because they become too sick to work) are actually worse off because of Obamacare. This is the conclusion of a new Heritage Foundation study, authored by John Goodman and Devon Herrick.

Before 2010, a person with serious health problems in Texas generally had access to the state’s risk pool. The insurance was administered by Blue Cross and it gave the insured access to almost every hospital and every doctor.

Yet there is not a single health plan in Dallas/Fort Worth today that will give an enrollee access to UT Southwestern Medical School – perhaps the best medical research facility in the world. There is no individual plan sold in the entire state of Texas that will get a cancer patient into MD Anderson Cancer Center in Houston.

This same pattern is repeated all over the country. In fact, the insurer that has been most successful in the Obamacare exchanges is Centene – a Medicaid contractor that generally covers only those providers who will accept Medicaid rates. What Centene offers enrollees is basically Medicaid with a very high deductible.

Meanwhile, middle-income families who are not getting a subsidy are literally getting priced out of the individual market. Robert Laszewski gives the example of a family of four in northern Virginia, one among the 40% of families who do not qualify for a subsidy. The family faces a premium of $19,484 plus a $6,500 deductible. In essence, the family will have to spend $25,984 before they can collect any meaningful benefits.