Some thoughts on the views that have animated this column.

This will be the last of my columns for this publication, so I thought it fitting to note the views that have most influenced these writings. Foremost is my appreciation of America’s character and strength and my opinion that the only earthly thing that can stop this great country is a national failure of will or a continual series of misguided political decisions.
My optimism is driven primarily by the ingenuity and resilience of America’s people. A nation of more than 300 million will have its share of lawbreakers, slackers and charlatans, but America is so much more filled with people who are wise, honest and hardworking. The capacity of Americans to sacrifice—greatly at times—for others is truly impressive.

This is why I so often stressed that individuals, families and businesses should as much as possible be the ones making decisions instead of politicians and bureaucrats, no matter how well-intentioned. Some will argue against this view, and it is certainly true that individual decisions will not always provide the optimal result. But it is just as certainly true that this approach will work better over the long term than one-size-fits-all diktats of government. From the five-year plans of the former Soviet Union to ObamaCare, the troubles that can befall a country from top-down government control and political attempts to pick winners and losers are obvious.

My optimism has also been fueled by what history shows is the amazing ability of our economy to generate jobs, innovation and better standards of living, not just for our nation but for the world. We are rightly seen as the land of opportunity, and it is no wonder people from other nations flock here.

I must admit this optimistic view has been challenged over the past decade. One of the most obvious reasons for pessimism is the sad state of the national fisc. Deficits are not in and of themselves bad, but running large deficits for multiple years is. Burdening future generations with trillions of dollars of debt is a deplorable abdication of responsibility. One key to our future will be whether government can reduce the runaway spending that comes from trying to be all things to all people. It is critical that government instead focuses on its central responsibilities, reduces its tax bite, and gets rid of onerous regulations that sap the initiative of our people and the strength of our economy.

Another cause for concern is the stifling of economic growth and opportunity under the guise of environmentalism. We cannot afford continued attacks on our energy supplies. These policies, if carried to the fruition of which the left dreams, will crush our economy and with it our standard of living and our continued ability to be a strong presence in the world.
We are still the world’s sole superpower, and like it or not, that role comes with certain responsibilities. We cannot continue to be a force for good across the globe if we continue the recent trends toward isolationism and a hesitancy to get our hands dirty.

Recent efforts to shortchange our military and defense preparedness are not harbingers of success in this critical area.

We cannot let political correctness muzzle free speech. That this occurs with regularity on college campuses, where open debate should be most welcome, is a sad irony. Nor can we continue to impinge on the freedom of religion. Encouragingly, the recent Supreme Court ruling in Town of Greece v. Galloway reaffirmed the view that God has a place in the public square.

Since our strength flows primarily from our people, the character of future generations is important. Will the left succeed in making more of us dependent on government? Will the generations moving into the mainstream of politics and the economy over the next decades be like the college graduates recently in the news who seem to have majored in taking offense or claiming victim status? Or will they be more like the young men and women who have performed so amazingly in Iraq and Afghanistan, and the ones starting careers and families? The next generation does not have to be the greatest generation, but it cannot be the weakest generation.

Of course, education is critical. We must not let union bosses and other forces of the status quo stop innovations that would ensure a good education for all. We must find a way to make higher education more affordable so those needing a degree to pursue their profession are not blocked from seeking that degree or saddled with significant debt.

These are the views of, and hopes and concerns for, America on which my columns have been based. I must note my gratitude to James Taranto, my editor par excellence for these columns, and to Brad Zuber, who has provided me with research and other assistance for nearly two decades. These columns have been better because of their efforts. 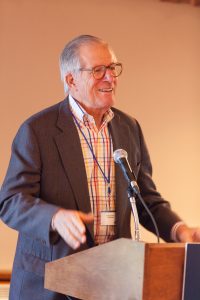 Finally, I want to thank all of you, the readers. I know from the comments section that not all have agreed with what I wrote each month, but I hope you enjoyed thinking about and debating the issues I raised. Please continue to read the editorial section of this great publication. It is rare to find such an abundance of writers in one place who can so interestingly write in a way that separates the truly important policy essentials from the dross of today’s political rhetoric.

It’s been a pleasure to be associated with all this over the years, and I wish everyone the very best.