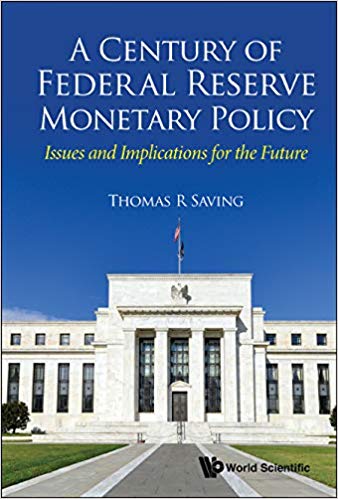 A Century of Federal Reserve Monetary Policy: Issues and Implications for the Future Hardcover

by Thomas R Saving (Author)
Synopsis:The Federal Reserve System, created in the early 20th century, is now more than a hundred years old. This book takes the reader through the founding and first century of Federal Reserve monetary policy, and uses the analysis of the past to address the present and future issues of central banking.

With its focus on the actual policies, rather than the politics or individuals that determined those policies, this book addresses issues that have plagued monetarists since the onset of the Great Recession. Then, it proceeds to discuss the issues that will affect the efficacy of policy in the future. This section of the book is relevant for all central banks as central bank behavior post the onset of the Great Recession was similar throughout the world.

The book presents an analysis of the path of inflation that puzzled the experts. It adds an analysis of central banking’s ability or lack thereof to influence market interest rates. Lastly, it explains the current exploding crypto-currency craze, its potential to supplant traditional transactions media, and the future of these so-called currencies.

View or order the book from Amazon.com