The Goodman Institute for Public Policy Research is making a significant impact on public policy. Our most important achievement this quarter is bicameral legislation to reform health care and replace ObamaCare. This legislation, which I helped formulate, minimizes the role of government and allows decisions to be made by individual choice and competition in the market place. 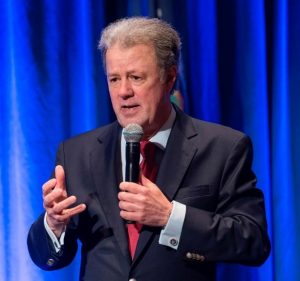 Dr. Goodman explained the GOP alternative to ObamaCare at a Hillsdale College conference at the Waldorf Astoria in New York City in April.

The Task Force advising House Speaker Paul Ryan on health reform has released a long awaited report. Although it has no numbers and no details, the report endorses general principles, many of which have already been incorporated in the Sessions-Cassidy legislation I helped draft. These include: 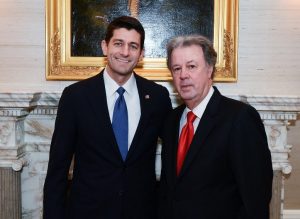 There is, however, one important difference. For more than a decade. Speaker Ryan has advocated a universal health tax credit, an idea that is included in the Sessions/Cassidy legislation. The Task Force report did not go that far, proposing a credit for the individual market, but not for employer-provided insurance. We still have some educational work to do both in the House and the Senate.

The Sessions-Cassidy bill would make good on what most regard as ObamaCare’s three broken promises: universal coverage, cost control and real protection for people with pre-existing conditions. 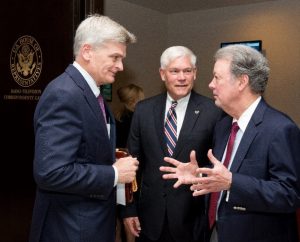 The bill is sponsored by Rep. Pete Sessions (R-TX), who as Chairman of the Rules Committee is regarded as the second most powerful person in the House of Representatives, and Sen. Bill Cassidy (R-LA), who is probably the most knowledgeable person on health policy in the Senate.

Obamacare takes a defined benefit approach: The government tells people what kind of insurance they must have and lets them worry about how to pay for it. That’s why 33 million people are still uninsured and millions more are under-insured. The Sessions/Cassidy legislation takes a defined contribution approach: It gives people a tax credit and lets competition in the marketplace determine what can be provided for that amount. The credit is tied to the cost of Medicaid, creating a floor to which everyone will have access. (More at Forbes)

There is no reason under this legislation for anyone to be uninsured, even though there are no new taxes and no new spending.

Sessions and Cassidy call their proposal “The World’s Greatest Healthcare Plan.” Given what they are attempting to do, that appellation may not be unreasonably boastful. Based on a thorough review of the major ways in which federal policies create perverse incentives, the bill corrects those perversions and removes the federal government as a source of some of our most important health policy problems. (More at Health Affairs)

At the Goodman Institute web site you may find the proposal’s 12 bold ideas, with links to short white papers explaining each of them. Find also 25 problems in ObamaCare that the legislation is designed to correct as well as a link to the actual bill, principles that guide the reform and other documents.

Kotlikoff and Sachs: Are Robots Taking Our Jobs?

Economists Jeffrey Sachs of Columbia University and Laurence Kotlikoff of Boston University argue, “What if machines are getting so smart, thanks to their microprocessor brains, that they no longer need unskilled labor to operate?” After all, they write:

Smart machines now collect our highway tolls, check us out at stores, take our blood pressure, massage our backs, give us directions, answer our phones, print our documents, transmit our messages, rock our babies, read our books, turn on our lights, shine our shoes, guard our homes, fly our planes, write our wills, teach our children, kill our enemies, and the list goes on. (More) 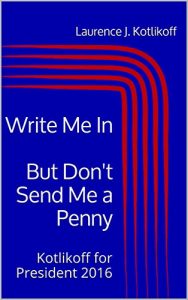 New Kotlikoff Book: Vote for Me

In a brand new book (which you can down load for free) Laurence Kotlikoff announces he is running for president. The book is titled, Write me In: But Don’t Send me a Penny. Is he serious?  l don’t know, but it doesn’t matter. The book is a great read – covering themes that Goodman Institute followers will recognize: Why elderly entitlements threaten to bankrupt us and why Dodd Frank hasn’t made the banking system any safer. 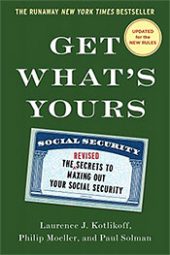 Laurence Kotlikoff and his colleagues have revised their book to make sure you continue to have the latest and most accurate information on how to get the most out of the Social Security benefits you have paid for and earned. (Learn more)

Saving and Rettenmaier: Medicare Is Worth More than Social Security For Young Workers

By the time today’s young workers retire, Medicare will spend more on them than they get from Social Security and the two programs combined will replace more than 100 percent of their pre-retirement wages. The reason: health care spending is expected to grow more rapidly than wages.

An alternative is embedded in the Affordable Care Act (Obamacare), which requires Medicare to grow no faster than the rate of growth of the economy as a whole. Were that to happen, the study says that Medicare spending will equal about 40 percent of pre-retirement wages, indefinitely into the future. But that will require Medicare fees to doctors and hospitals to fall increasingly behind private sector fees, threatening access to care for seniors. (More) 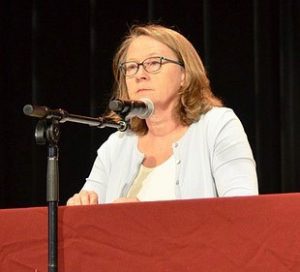 Linda Gorman debated the merits of a single-payer health care system in Colorado.

Opposing sides took the state in June at Strings Pavilion in Steamboat Springs, Colorado, to debate the merits of a single-payer healthcare system. Goodman Institute Fellow Linda Gorman said Amendment 69 is “risky and flawed” and the “entity that will be your insurer will be outside all government checks and balances.” (More)

We appreciate your continued support of the Goodman Institute’s work. If you have any questions or require any additional information, please do not hesitate to contact me by phone at 202-679-9622 or via email at johngoodman@goodmaninstitute.org.