It’s been only three months, but 33.5 million Americans have already lost their jobs. The unemployment rate, now 15 percent, will soon hit 20 percent. That’s a higher rate than we averaged during the Great Depression. GDP is now running 40 percent below last year’s level. During the Great Depression, the maximum annual GDP decline was 26 percent. Major companies, some a century old, are now going bankrupt. Others, across all sectors of the economy, will soon hit the rails. Even segments of the healthcare industry are in financial peril and laying off employees. 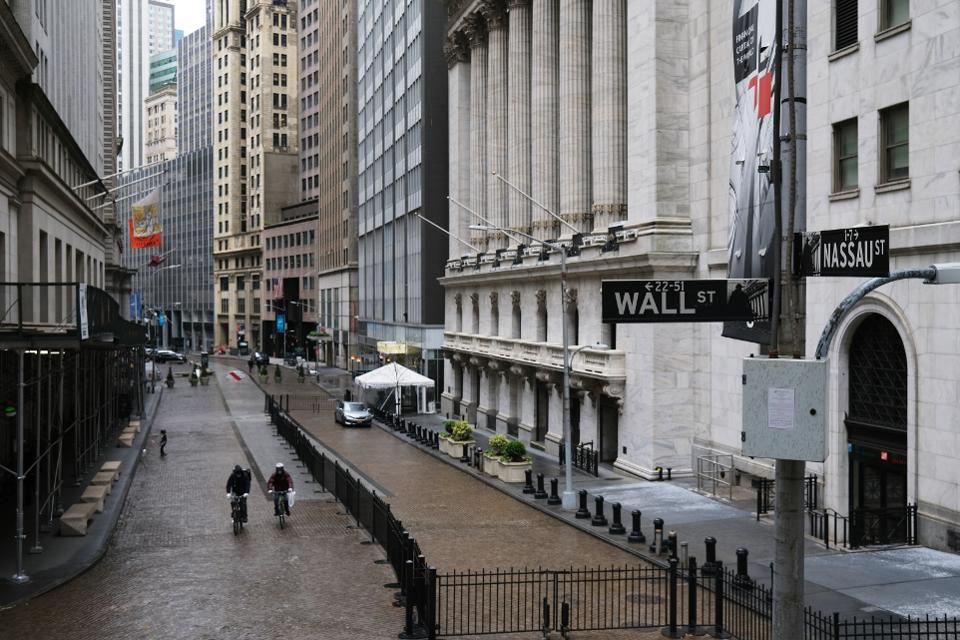 We need a coordinated national policy to capture and kill Covid-19, not a “backup” task force. As described in my recent column and in this protocol by Professor Peter Frazier of Cornell, short of a miracle vaccine, defeating Covid-19 requires household-based group-testing of every American household every week. Doing so can get the economy back on its feet in four weeks with 96 percent of the population entirely virus free, sporting green wristbands to make clear to all they are virus free, and able to engage fully in normal activities. The remaining 4 percent would be in quarantine. After two months the virus, for all intents and purposes, would be history, with essentially no new cases or additional deaths. Moreover, those arriving to our shores would also be group tested and, if tested negative, given green wristbands or, if tested positive, placed in two-week quarantine. The green wristbands would be coated to turn to red after one week, meaning every household that tested green the week before would need to be retested. By retesting weekly, the number of false negatives released into the economy goes to zero over the course of just one month.

Group testing all households each week requires six million tests. This is well within the range of weekly testing our country can preform, if not this week, within three weeks. Best yet, each household’s sample can be provided by its members via a comfortable saliva test, developed by Rutgers University, which the FDA has just approved.

Unfortunately, Drs. Fauci and Birx aren’t pushing this approach for reasons that baffle and dismay me. Maybe they are concerned that each person needs their own diagnosis. But in this case, they don’t understand standard grid-based group-testing protocols, which precisely identify positive subjects. Yes, the subject here is a household. But since household members need to quarantine together, determining the particular household members that are positive is only necessary when such members become seriously ill. In this case, they’ll be individually tested according to their doctors’ orders. Whatever the cause of their intransigence, which may simply be their not having studied or understood Professor Frazier’s protocol or the strictures of the President’s political calculus, our death count, now over 78,000, will keep climbing and with it the fear of going to work, frequenting a restaurant, shopping in crowded stores, and engaging in other routine economic activities. Yes, I know, half the states are reopening. But most are doing so in violation of CDC guidelines. Hence, we are largely returning to where we were in February, i.e. roughly the same conditions, position, and, generally speaking behaviors, from which our country’s Covid-19 infections and deaths exploded.

Secret 1: Cut Your Spending and Tap Your Retirement Account Assets

There has never been a more critical time to do lifetime financial planning — planning that takes full account of your cashflow constraints. As those of you who follow my columns know, my personal financial planning company’s software, MaxiFi Planner, does such planning. I don’t know any other software available to the public or financial professionals that does the same. Hence, I’m going to use our software to illustrate some key secrets to financially surviving Covid-19.

To be clear, the Covid Plague may end in a month or in two years. No one knows. We’ve seen some countries, like Sweden and Taiwan, stay open and manage very well. But our country is managing very poorly. How much is due to this or that factor is unknown. What is known is that new infections across the country have barely declined and in some states, as distant from one another as California, Texas, and Alabama, new infections are currently on a tear. Indeed, if you leave out New York, which is not opening up, new cases across the country are increasing, not falling.

Everyone, even those with jobs, needs to adjust their spending immediately in light of actual or prospective job loss or salary cuts. This goes for tenured professors like me. Hundreds of universities and colleges will close, most for good, depending on the duration of this plague. Hence, we all need to plan for an extended period of low or zero wages. As for retirees, the real (inflation-adjusted) return one can safely earn in today’s market is zero. A couple years back it was 1 percent. That may seem like a small difference. It’s not.

How much should one cut spending? Let me illustrate. Take a middle-class, Indiana couple, John and Sue, age 50, both of whom were earning $75,000 before the plague. The couple, I’ll assume, has a combined $800,000 in 401(k) assets, a $500,000 house with a $350,000 mortgage. John has just been furloughed. He works on internet affiliation deals, which are now dying on the vein. He now worries he’ll be out as long as two years. To make matters far worse, as I noted above, the safe long-term real (after inflation) interest rate is now zero.

How big a hit will the couple take under their worst-case scenario? This entails not just planning for John to be out of work for two years, but also planning on the couple’s earning no real (inflation-adjusted) return in the future. Yes, they could invest in stocks. But stocks are risky, particularly now. Once you adjust for their risk, they are yielding precisely zero after inflation. And, yes, the safe long-term TIPS (Treasury Inflation Protected Securities) rate may go back up. But it may also fall further. Hence, John and Sue have decided to plan prudently and assume they’ll earn what they can actually now safely earn on their assets — zero percent, not 1 percent real, which they were previously assuming.

But that’s not the worst news. The couple is cash constrained. They only have $50,000 in the bank. Consequently, their plan requires a $22,404 or 29 percent spending cut to get through the next two years with annual discretionary spending thereafter at $67,262. This is a huge adjustment, which is leaving John and Sue nervous wrecks. Cutting one’s routine spending by even 10 percent is tough enough, but 29 percent?

One answer is for the couple to take special withdraws of $75,000 for the next two years from their retirement accounts. Thanks to the CARES Act they can do so penalty free. Now the couple can spend $66,983 on a smooth basis going forward. This entails cutting their annual real (inflation-adjusted) spending by $9,249 (relative to their previously planned $76,232 per year) and their monthly spending by $771 for the rest of their lives. That’s a nasty 12 percent hit from what they’d planned to spend two years back when they last updated their plan. But if John and Sue don’t cut their spending now, their living standard will take an even bigger hit down the road.

Working longer, if that’s possible, is a way to partially offset the couple’s sustainable living standard hit. If John works till age 67 rather than retires at his planned age 65, the couple can spend $69,112 per year, which is 9 percent less than the original $76,232. If both John and Sue work through 67, annual discretionary spending is $71,108 — 7 percent below $76,232.

John and Sue have a great investment opportunity of which they may not be aware. Their mortgage interest rate is 3.75 percent. Meanwhile, the long-term Treasury bond rate is 1.25 percent. Hence, there’s a 2.50 percent real return available from pre-paying their mortgage. Suppose the couple withdraws $70,000 a year from their 401(k)s for roughly five years to pay off their mortgage. Does this help? It certainly does. Now the couple’s sustainable discretionary spending is $74,755, up from $71,108. (This column provides another illustration of the gains from pre-paying one’s mortgage even at the price of paying higher taxes in the short run.)

John and Sue plan on taking their Social Security retirement benefits at age 67, when they reach full retirement age. What if they wait till 70? Doing so will raise their annual benefits by 24 percent adjusted for inflation. How does it impact their affordable, sustainable annual discretionary spending? For the next four years, they get to spend $77,492 per year. Thereafter, they can spend and keep on spending $78,646. Both of these figures are above the $76,232 annual spending they’ve been doing in recent years. By the way, the reason their spending rises after four years reflects the structure of the couple’s cash-flow constraints.

Secret 5: Move to a Cheaper State

Both John and Sue have jobs they can do remotely. As mentioned, before he was laid off, John worked setting up internet affiliation deals. Sue does remote training of customer reps. Consequently, nothing is tying them to Indiana, which has a 3.23 percent state income tax. That’s not huge, but not nothing. What if John and Sue relocate to Texas, which has no state income tax, reproducing their current housing arrangement. Their annual sustainable living standard rises to $80,858, which is a whopping 6 percent above their pre-Covid-19 level!

As you’ve seen, for some, probably most households, it’s possible, with the help of a powerful financial planning tool, to survive the terrible economic situation so many of us are now facing. I’ve considered adjusting spending, taking retirement account withdrawals early, retiring later, paying off one’s mortgage using one’s retirement account asset, maximizing lifetime Social Security, and relocating to a cheaper state. There are many other things John and Sue can consider, including refinancing their current mortgage, planning, down the road, to take out a reverse mortgage, downsizing their home, doing a Roth conversion while their tax rate is low , starting their own business (John is considering setting up a groceries purchase and delivery service in his new Texan community), reducing contributions to retirement accounts if it doesn’t jeopardize their employer match, taking in boarders, moving back in with your parents, and the list goes on. The biggest secret is doing precise, living-standard-based lifetime financial planning. Economics-based financial planning is another term. Its dramatically different from conventional financial planning, which, to my knowledge, can’t make any of the above calculations correctly. Economic-based financial planning can turn Covid-19’s financial nightmare into something not just manageable, but surmountable.